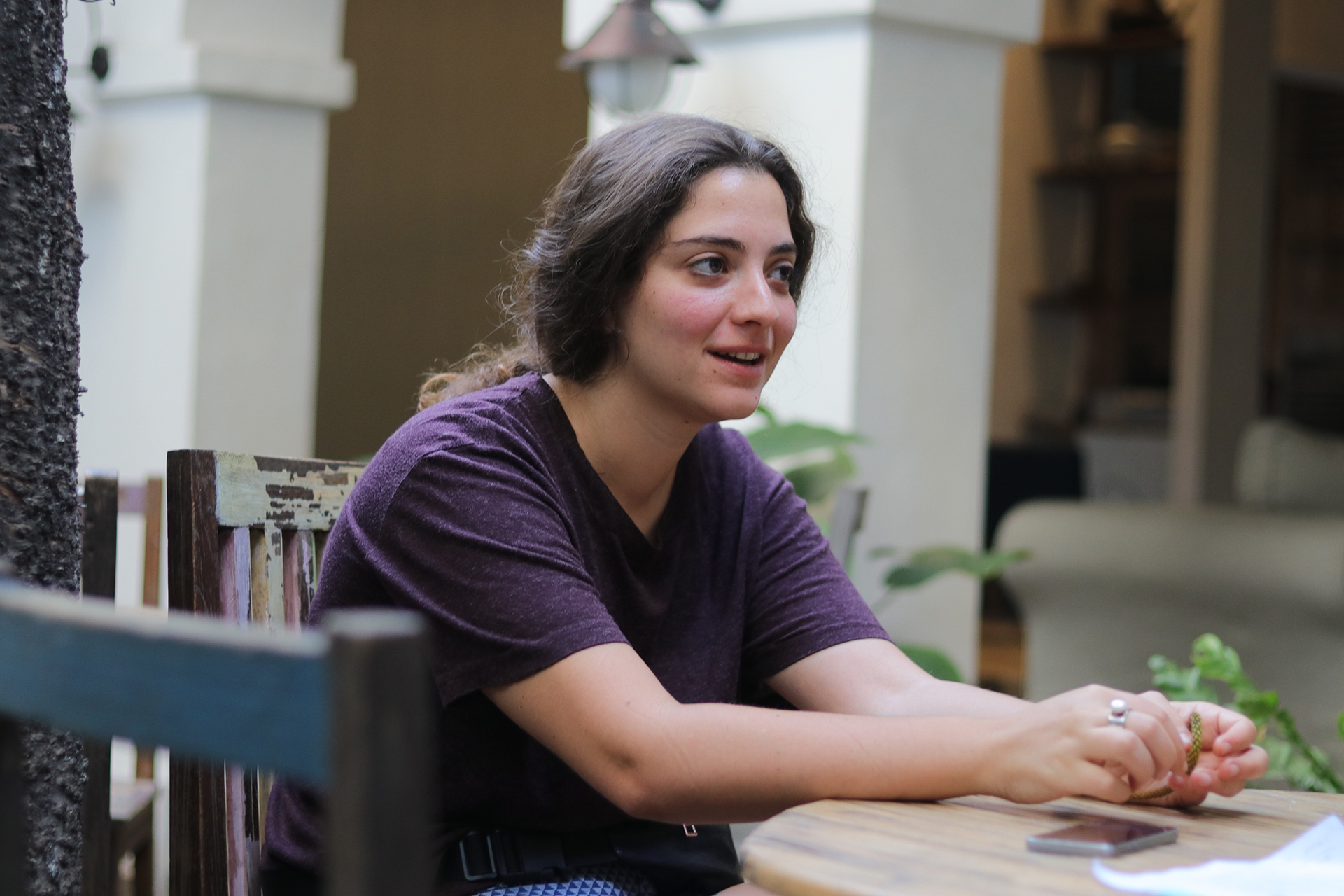 Honed as one of Cairo’s best underground artists, Nadah El Shazly is no strangers in the big map of experimental electronic music scene. By exploring old Arabic music and gathering many influences, she produced her notable release “Ahwar” which comprised of many collaborators in it. In collaboration with experimental electronic festival Nusasonic, we met El Shazly in Yogyakarta to talk more about language, vocal range and spirituality.

You started learning to play the piano when you were a child. But how did you realize that electronic music is your forte?

I’ve always loved music as a child and when I had the chance to take piano lessons, I had the feeling that “I can make it too”. I played piano ever since then and I just kept developing from there. I was around 5 or 6 when I started playing piano, so it was just natural. I think that developed into the electronic music that I do today.

Being in underground music scene and coming from Cairo, how hard it is for you to expose your music?

It is hard because in Cairo it’s not easy to find the places to play music. So I guess, it boils down to trying to play live show as much as possible and putting your stuff online, and just going to other people’s shows, and just also being aware of what’s going on offline and online.

Do you have any specific channels on the internet?

Soundcloud is what I use mainly, YouTube as well, but more Soundcloud for sure. Now there is also the free mp3 sharing platforms. I haven’t used it but I see so many people using it now.

Sometimes people don’t take you very seriously, I think, or can’t be more open about taking you seriously when you are a woman.

Are there any boundaries because you are a woman from Cairo?

The boundaries that first comes to mind, are things related to lack of venue. Not enough money, not enough labels, not enough channels, not enough music writing, all of these things and I think these are the problems that come to my mind very quickly. And I think there are problems that are related to anyone who’s making music at this moment in Cairo. Sometimes people don’t take you very seriously, I think, or can’t be more open about taking you seriously when you are a woman. But I find, the moment you are very serious about your work and you’re really focused, and you don’t compromise, you instantly command everyone’s respect.

It’s my language so I just root in it.
Language can be a barrier in communication, including artwork. In your case, you decided to use Arabic language in your work. What was the motive behind it?

I don’t know, I think I was just working very spontaneously. So I started writing in Arabic and then it was that, you know. And I didn’t control the process very much. I mean of course I did, because I was writing the music but I guess I didn’t think too much about anything related to the language – it’s what I speak, it’s what I hear. It’s my language so I just root in it.

I’m sure the language influences the singing, because if you use language – it dictates the rhythm
Because of the Arabic language that you use for lyrics, your vocal range and tone offers distinguished character. Did you plan this ahead?

Your work is influenced by old Arabic music which has a bold sound. How did you find the formula incorporate its complexity into your music style?

It is the same with what you do here, you will be writing in the dialogue that you speak. I don’t really think much of the formula.

I think it’s falsely attributed because at the same time; music, whatever it is has some sort of spiritual thing to it.

Have you encountered people said that your music is spiritual, with the stigma surrounding Arabic language?

I have encountered this before. I think there is the easy way to view my music as Arabic music has been attributed to spiritual music and spirituality. But I think most of the time it’s from someone who doesn’t necessarily understand the words and the context. So I think it’s falsely attributed because at the same time; music, whatever it is, has some sort of spiritual thing to it.

Your album, “Ahwar” took 2 years of production. What was the turning point that made you decide to wrap up the album?

It did take 2 years because I was also doing other things and I took my time with it. I didn’t rush anything so I was just working slowly. And when the part of the songwriting itself ends then it’s finished. And OK the song is finished. So it’s a partial decision, “okay this song is finished now”, and that’s that, there’s not much you can do to it. And there it works as you see it, and it’s exactly you wanted it to be.

I think it influenced the way I play, it opens a little more options for me and the tools that I can use.
How much old Arabic music has influenced you?

When I was working on “Ahwar”, I was also listening to a lot of very old Arabic music and it influenced me for different reasons. Because in the general culture when you say old Arabic music, you don’t think about the 1880’s, 1910’s, 1920’s, you think about the 50’s, 60’s, and 70’s. So I there was a big part of me that asked “why is no one telling us about this”. And it was very interesting to listen to it and to hear how they played the instruments. And I think it influenced the way I play, it opens a little more options for me and the tools that I can use.

Any other external influences?

Of course. YouTube, you know, we can hear anything on YouTube from everywhere. And I’m sure I’m influenced by a variety of things because I’m open to them.

Experimentation plays a big part in your creative process. But when did you know when to stop?

Sometimes people get stuck and they always want to try something new. But when a piece is finished, it tells you somehow that it’s finished. The piece itself tells you “I’m done”. And then you feel “Okay, it is done. Nothing more that I can do”. And it’s also the decision is the clear decision that you make. Because you can go on and go on, so you decide “now i’m going to finish the song”. But experimentation continues in the live performance.
When a piece is finished, it tells you somehow that it’s finished
So when I play live, and it’s also depends, because your taste changes. Sometimes you hate the drums, sometimes you love the vocal line, and sometimes you think its too long. So in live performance there is this feeling that experimentation goes on and the different interpretations can still continue. It’s also whether you want to invite another musician to play with you, or just playing solo, whatever it is, when it’s performed live it definitely continues.

How far has your work brought you to this date?

Beginning of this year I started working with the band on the pieces, so I think this is a new adventure because I was playing solo before that. And also traveling so much and playing in festivals, I was listening to so much music, and attending lot of live shows that influenced me. So today, of course I’m not the same as I was last year. And I’m sure it will somehow become more and more obvious, either in the live performances or in the next album.

I read an article about your complex relationship with Cairo. Would you mind telling me how complex it is?

Because there is a very strong polarity of thoughts and feelings, and that makes really great music content, I think it’s my favorite music content. There’s so many different places in Cairo, but there is not a lot venues and there is no musical infrastructures. Cairo is one of the most beautiful destinations to go on vacation, but there’s a lot traffic that causes so much noise. But it’s also my home, so I’m staying there.

When you were invited to be part of music festival Nusasonic here in Yogyakarta, what were your expectations?

My expectation, I mean first of all, I was really excited to be invited. I was always following the e-mail to see if it’s confirmed or not because I was very happy. It would be my first time in Indonesia and in this part of the world. My expectation is to hear really good music, meet really cool people and have interesting conversations. I also didn’t expect that I would find a lot of similarities with Cairo. And it makes me feel very eased and relaxed.

How do you see the experimental electronic music scene in Asia by participating in Nusasonic?

I think I’m only starting to get a feel for it. I’m only starting to understand the very first encounter, so I can’t make any judgements right now. But what I’m definitely going to do is to try and visit the musicians that I got to meet here, go to Malaysia and play a concert, and create new duos. It’s very fun for me to be here and I want to play more here, play more with musicians from Asia.

Do you have any new projects coming up soon?

This year I was very focused on my solo project. Playing, touring and working with the band. I’m taking part and collaborations with Land of Push. They’re working on an orchestra, and we’re gonna play together in late October. I also played some collaboration shows. Next year I’ll start to work on the new album. So now, I’m preparing for the new album.

The composition is very fast, but I take my time to finish
How long will it take?

I have no idea, I’m very slow. The composition is very fast, but I take my time to finish. So I don’t know, maybe I’ll surprise myself this time and work very fast.

Where are you going to do the tour?

I’m almost finished now, I had two big stretches. The one was in the spring, and now it’s almost over. So I’m going to Germany next week, and then Belgium, and I think that’s it.

Nusasonic is a multi-year project that plunges into a broad spectrum of experimental sound and music cultures in Southeast Asia, enabling dialogue within the region, with Europe, and beyond. Initiated by Goethe-Institut, and collaboratively created by Yes No Klub (Yogyakarta), WSK Festival of the Recently Possible (Manila), Playfreely/BlackKaji (Singapore), and CTM Festival for Adventurous Music & Art (Berlin).