To Infinite Genres and Beyond with Bartees Strange 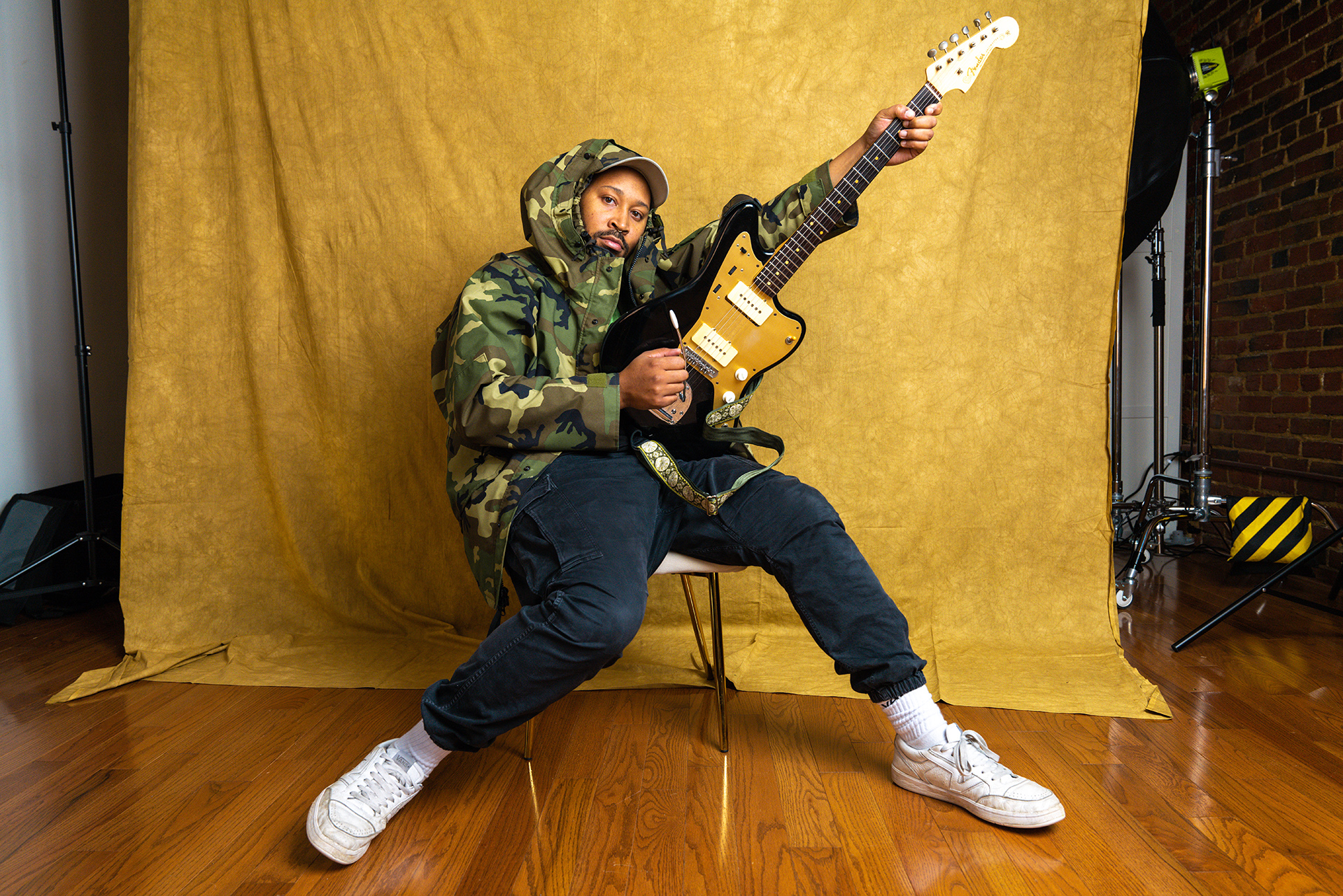 To Infinite Genres and Beyond with Bartees Strange

We talked with the latest addition to 4AD records’ star-studded roster, Bartees Strange about his genre-defying music, living as a black musician post-Black Lives Matter, and how Indonesian bands amaze him.

Bartees Strange sounds like the future. He’s been compared to TV on The Radio, Bloc Party, Young Thug, to Fall Out Boy. His music combines elements of folk, hip-hop to emo. His first album, “Live Forever” where he sang about his life as a black artist living in the white culture won Pitchfork’s Best New Music in 2020.

This year, he signs with 4AD Records and announces a new album titled “Farm to Table” which not only continues his marvel in genre-busting music but also expands its sound to a stadium-level arena, just where his art belongs. With the help of kind people in Love Da Records Indonesia, we managed to talk with Bartees about his bucket list as a musician, his thoughts for musicians who still have to work full-time jobs, as well as his view on modern-day America.

Your first album, “Live Forever”, was praised for how it featured many styles, from arena-rock, and folk, to rap and even pop-punk/emo. “Farm to Table” expands this exploration further where sometimes you sound like Bon Iver, Local Natives, to Johnny Cash. Is this your way of saying that genre is no longer relevant?

In my own way yes – I guess because the genres never were really relevant to me. I just wanted to make everything. I see it all as different tools I can use to express myself. And I’d love to hear other artists do that. What would a house song sound like from Kacey Musgraves? What would a country song sound like with Giveon? Probably beautiful, they definitely like more music than they make – everybody does.

As a new artist, how does this multigenre persona help you find a place in the heart of a new audience?

I don’t know, I’m still figuring that out. I feel lucky I get to do this at all and to connect with new fans. It’s a funny blessing. I hope that because the music is all over the place it’ll attract people from everywhere. That’s what I hope.

Your musical journey seems like your way to make your “American Dream” come true, something that you sang in “Cosign”. Do you have any bucket lists for artists/musicians that you want to collaborate with? And when the list is fulfilled, what will be next for you?

What is the reason for signing with 4AD besides being on the same roster with The National? And how do you think labels such as 4AD help artists connect with the audience in the era of social media?

4AD historically has great taste. And I’ve looked up to the label as a great partner for great songwriters. It’s incredible what they’ve done and who they’ve supported over the last few decades. I’m honored to be in this very small club. It’s the greatest accomplishment of my life. To me.

In Indonesia, with the nearly non-existent music industry infrastructure, musicians are forced to be active in social media making “contents” as well as having to have a full-time jobs. How does it compare to situations in your part of the world? And do you have a message for struggling artists in Indonesia?

Sure – I’m 33 years old. Up until last year, I was working full-time and making music as often as I could. I understand that grind. And I also understand how lucky I am to be able to focus on music at this stage in my life. My suggestion is honestly – never give up. Also – make sure you do it for the right reasons. I always knew I would be making music whether I became “popular’ or not. Some of the most inspiring and powerful performers I’ve ever met work every day and let it out on Sunday mornings. No shame in that either. Just build what you wanna build no matter what.

Can you explain your experience with the “modern-day Steve Albini”, Will Yip?

Will believed in me so early in the game – he has been such a tremendous source of support – So grateful to him. When he signed me for “Live Forever” he said, “We’re gonna make this record big, and in a year you’re going to sign a great record deal to a dream label.” He told me this when I had a full-time job, I hadn’t released any music, and nobody knew about me. But he saw the future. I will never forget how much of an impact that made on me. It helped me believe in myself to know somebody like me will see something in me.

Post pandemic, there have been discussions on how people are acting during live concerts, from the use of masks during performances, to the ubiquity of cell phones at concerts, and the latest is from Big Thief where Adrienne Lenker asks the audience to be quiet and pay attention to the opening act. As a performer, how do you see the pandemic change in how people enjoy music? And how do you expect your audience to act on your set?

I think people generally mean well. We’ve been lucky at our shows – people have been very open to our music as openers. I think people are having more fun at shows – we’ve all been locked inside for years. We’re finally able to be with each other and enjoy music.

How does it feel to be a black musician in the post-Black Lives Matter era?

Oh, it feels the same as always, to be honest. White people feel a little more open to listening to what I have to say which is nice. But I truly believe that black and brown people making art is a revolutionary act. We’re creating things that didn’t exist before, that’s quite a statement from a group of people who’ve been told for centuries that their thoughts, art, and history didn’t matter. I feel even more emboldened.

I truly believe that black and brown people making art is a revolutionary act. We’re creating things that didn’t exist before, that’s quite a statement from a group of people who’ve been told for centuries that their thoughts, art, and history didn’t matter.

We would like you to listen to some of Indonesia’s bands/musicians, and if possible, will you share your thoughts on the songs as a producer:

Wow, this is awesome – it reminds me of black midi but it’s more melodic – I love the bridge math-rock rapping section. This is absolutely amazing. Great drum playing and incredible tone. Excellent guitar lines. Love this buried vocal production. This is truly incredible. I’m catching notes of like Toe, Tortoise, black midi, Slint, and At The Drive In. Sounds like somebody went to music school – looking at you drummer. YOU HAVE A NEW FAN IN ME!

THIS IS SOME TRULY CREATIVE AND THOUGHTFUL GUITAR PLAYING – very cool sound. I would do anything to see this band play live. They fucking rock. It’s like fast good Led Zeppelin mixed with all of the good parts of Rage Against The Machine. Hearing some Fall of Troy in there. Feeling some Omar Rodriguez on the guitars here. Killer.

I really like this song – I don’t know if I would have made the intro as long as it is – but in a way it reminds me of Khruangbin or Don Caballero (one of my faves American Don) – it’s just a vibe. And that’s ok. The horn is one of my favorite elements of this mix – well placed and well played. Whoever wrote the part feels like a very thoughtful person. It’s wonderful watching the character in the horn developed over the course of the song. I think we could have got to the ending climax of the song a little quicker, but the way it’s paced is really thoughtful – great work, mates.

Yo, I hope you take this as a compliment but this feels like Queen to me. Vocals are very well placed and tracked. I love the arrangement – there’s some very deep stuff happening here. My mom is an opera singer. It was interesting to watch the song move from an aria to kasimer, to something even heavier. I may need to listen to this a few times, is the singer a classical vocalist? She has incredible control – very gifted artist. This is not my favorite sound as a band – but I gotta be honest – there is some excellent musicianship at play. Gifted artist.

Timbaland vibes – I love this. It reminds me of Serpentwithfeet, but with a big nice ornate chorus. I would have chosen a different snare sound – but it doesn’t hurt the song. Really dope song. I like this singer a lot. Soulful. I think this is a beautiful string arrangement. This guy has incredible range – tearjerker. I’m surprised that this song or singer hasn’t been snatched up by Disney for movies – this is a compliment.

What’s next for Bartees Strange?

Oh, who knows. More shows, more songs, more growth. More more more. 🙂 Thank you for having me in this interview. I hope that one-day music will bring me to Indonesia.