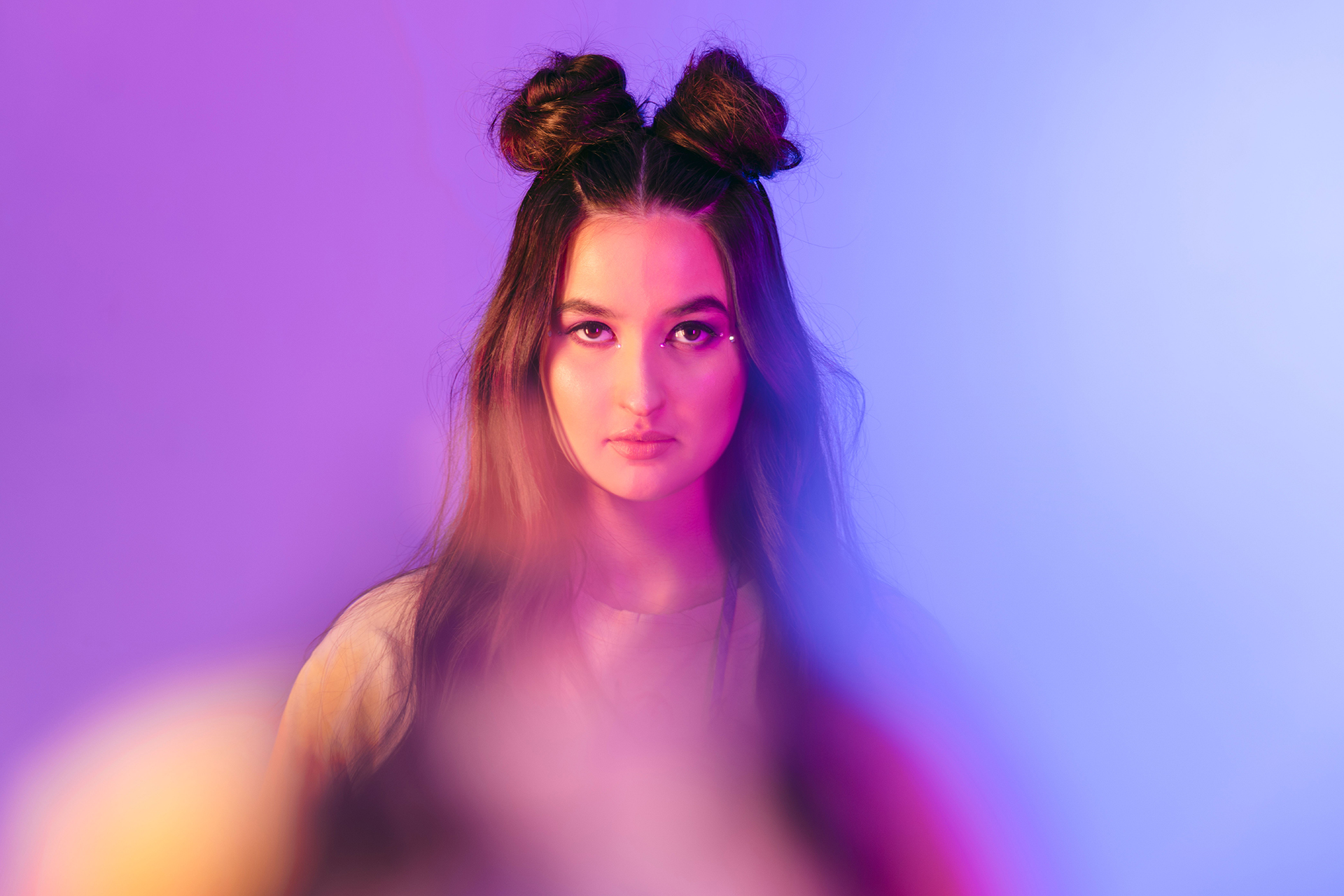 We caught up with Stephanie Poetri to talk about her upcoming EP “AM:PM”, moving on from her viral hit and Asian representation in music.

As a musician, it’s more often than not quite a gamble to have your music go viral and reach millions of listeners in a short span of time. But that’s not the case for Stephanie Poetri, a 20-year-old musician who’d rose to fame from “I Love You 3000” and was then signed with the music label 88Rising. While she was supposed to stay in Los Angeles to pursue her music career, the pandemic said otherwise. Now back in Jakarta, we recently had the opportunity to chat with her regarding her upcoming EP “AM:PM” and it’s first single “Selfish”, while also talking about moving on from her viral hit.

You’ve recently relocated to the US, and with the pandemic still in sight, how has it been affecting you creatively? And how has the new scenery changed your perspective in creating music?

So I remember when everything happened, I went back to Jakarta because I just felt like all my friends there went back home as well so I felt really lonely. So to be honest now that I’m back home I feel like I’m more creative in the sense that a lot of the things that I wrote are more honest and genuine. I just felt like right now I need to be home. So it’s pretty nice and I do a lot of Zoom sessions. I made songs through Zoom now so it’s pretty chill.

When did you exactly move to the US?

I went there in November 2019 and I was supposed to stay for a while, but because of this I decided to go back home.

With the release of your debut EP “AM:PM” just around the corner, what kind of new sounds have you put together as you’ve grown from “I Love You 3000”?

I like the word ‘grown’ (laughs). There are two different vibes for “AM:PM”, three songs have an AM vibe, and the other three is PM. For the AM vibe, it’s still acoustic pop, but it takes on a little more inspiration from the alternative indie type of music. For PM, it’s more moody and dark and “Selfish” is part of the PM – so that’s kind of the vibe we’re going for. So even though it’s still acoustic pop, the mood and the vibe is very different.

Was the whole concept of dark vs light has been in your head before you made the EP or did it come up as you went along?

When we finished recording all the songs, we didn’t really know how to combine them altogether since they’re just so different. So we were trying to figure out how to put it together to make it sound coherent, but then we realised, why don’t we just embrace the fact that they’re both different and make it into an EP which has two parts? Then we realised how some parts are very ‘morning’, and the others are very ‘night’ – so that’s how it was. At first we made it into Morning/Night, but then AM:PM came about.

“Selfish” is the first single of the EP and you’ve worked with Ojivolta (producers for Shawn Mendez, Halsey, Selena Gomez) for this track. Could you tell us more about this single and how was the songwriting process then?

“Selfish” is a song about when you’re kind of with someone but not really, and then you see them with someone else and you don’t know whether you have the right to be jealous or not because technically you’re not together but then you feel something so you’re like “Can I be selfish?” The song came to me half done, there was already a chorus and that’s kind of what sold me on the song. Later on we went into Zoom with the producers and other songwriters and we finished it together.

So it was made while you were in Jakarta?

Yes, we did it through Zoom. It was not long ago.

An interesting point I’ve read in one of your interviews is how you’re hoping to use your platform to boost other artists as well as a way to pay it forward. Could you elaborate more on that?

Every time someone – or people in the US – asks me “Do you have any song recommendations?” I often tried to give them song recommendations from musicians in Asia because I feel like once they’ve heard it they’d be more open minded with it. And they’ll start being more interested in culture outside of the US. I would often recommend songs from Sheryl Sheinafia because her songs are great and easy-listening, and since it’s in English so a lot of English-speakers would enjoy it with no trouble. But another reason why I recommend songs in English to others is that over time they would be interested in songs in other languages as well. When in contrast, if they were given songs not in English they would immediately say that they don’t understand it.

When we finished recording all the songs, we didn’t really know how to combine them altogether since they’re just so different.

So it becomes sort of a gateway to other music outside of the US or English-speaking countries.

Exactly. And you know how BLACKPINK has a very EDM sound at first and that’s why a lot of people were interested in them? And then they found other K-pop artists they would later like too.

With the global popularity of K-pop and ambitious labels like 88rising, the spotlight has now shined over talents in Asia. How do you see this development, especially with Indonesia being in the limelight as well?

I think it’s incredible mostly because I feel like growing up in Indonesia, I didn’t really have representation because my friends are mostly full Indonesian kids and I’ve always felt that I look different. But to be honest that was okay because I still could kind of find people who look like me on TV. But now, there’s more representation for Asians and Southeast Asians, and Indonesians too like Rich Brian and Niki. It just makes me happy because then there’s a lot of young kids who can now see these people on TV that look like them, that speak like them. It just makes me super happy because growing up and not having representation, it sucked. And the moment I saw someone who barely looked like me, it made me so happy, and so I’m just glad that now there’s a lot of people who look like us and it kind of gives us pride.

Is there some sort of pressure for being a representation for Indonesians? Do you feel like you have to represent your country in the best possible way?

I think it’s less about messing up and more about making sure that I do it the right way. I’ve always tried to be cautious because for example, if I say something I gotta make sure that I believe it too. Because you know sometimes you don’t want to just say something because they’re Indonesian, like I gotta make sure that I recommend people who are also good. But honestly, every single person that I’ve met or I’ve worked with have been so nice and great. I met Kak Sheryl not long ago and she was super nice and I’ve been a fan since back then so that was super cool. Same goes with Agatha Pricilla. Oh, have you heard that they did a cover for “Reflection”? There’s Agatha Pricilla, SIVIA, Yura Yunita, and Nadin Amizah, I love it so much and I kept telling people to listen to that.

Now a lot of people are compelled to be viral on TikTok and other platforms but people can tell if they’re forcing it.

Social media as well as streaming platforms have worked alongside each other in making music go viral. As a musician which song has become viral, what do you think of this?

I think with social media a lot of people think that we’re lucky but I feel there’s more to it as well. Now a lot of people are compelled to be viral on TikTok and other platforms but people can tell if they’re forcing it. So I think the more genuine you are, the more effortless you are, the better, and to be honest, if your aim is to go big, then you probably won’t because people would realise if you’re clout chasing.

So the best thing is to just make music because you love music and to do it because you want to. Obviously I get why since some people do need to go big to then have a budget, so I can definitely see that and I support it too. There’s a good way to do it too, to make songs that are genuine to you. If you make songs that sound like other people, they are not going to be too interested because they’d be like, “I’ve listened to this, why should I listen to that?”

And how do you overcome being dubbed as a ‘one hit wonder’?

I’m very chill with this because, in my opinion, I’m glad that I had to start over since as I create more songs, I get more people to find me through my newer songs and I would have a stronger fanbase who like me for who I am and not for that one song I did. I’m glad for that one song I did because then I got a lot of opportunities from it but I’m also glad that now I can have a group of supporters that I talk to everyday on Twitch, Instagram or Twitter. And to me I’m actually happier that I’m not getting too big because I feel that if you have songs that are always so popular, the moment you have one song that isn’t, they would be gone at an instant. They weren’t with me when I first started, so I’m actually really glad that now I could start over and grow together. But having said that, I do get opportunities from “I Love You 3000”.