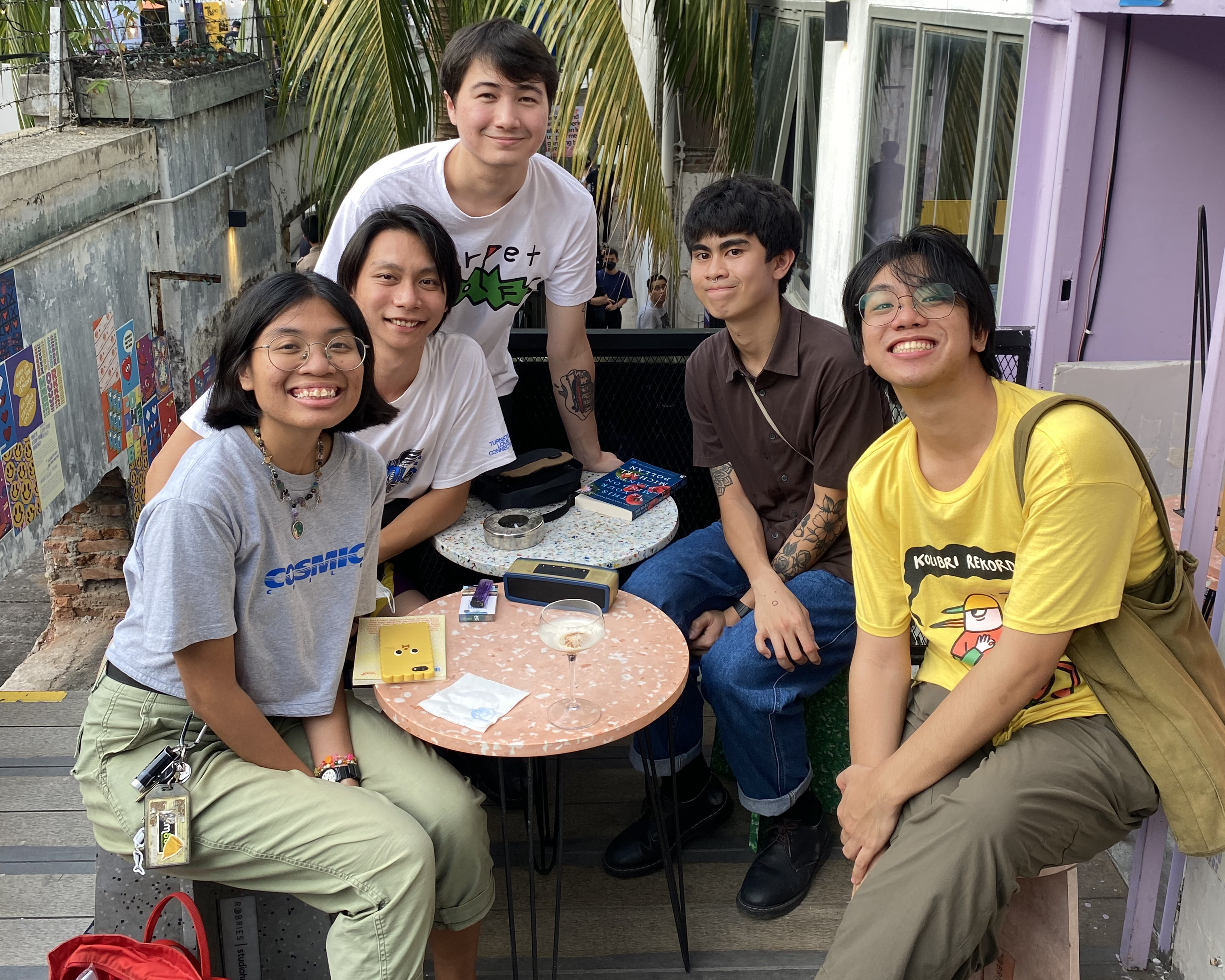 On a sunny afternoon at M Bloc, we sat down with Subsonic Eye and conversed on stories ranging from the band’s latest and upcoming releases, their US Tour, and their view on the Indonesian music scene.

Amidst the hecticness of last October’s Jakarta Art Book Fair, we had the chance to hang out with Subsonic Eye before they played a one-stop show at Gudskul Ekosistem, Jakarta. It was more like catching up with long-separated friends and drenched in laughter.

The Singaporean five-piece indie-pop band brought their distinctive sound (we don’t use the word ‘distinctive’ lightly here—they tune their songs down specifically to 432hz, rather than the orthodox 440hz, as the former is believed to be the Earth’s frequency. This Earthy bit is important because it is a theme in our interview) to Jakarta, just months after their US Tour, and weeks after their “Dijangka/Matahari” single.

On a sunny afternoon at M Bloc, overlooking the festive and packed Jakarta Art Book Fair, and just before their scheduled set at a Gudskul Ekosistem, Jakarta, we sat down with Subsonic Eye and conversed on stories ranging from the band’s latest and upcoming releases, their US Tour, and their view on the Indonesian music scene.

How was the art book fair for you guys?

Dan: It’s really cool, man. Singapore has [the exact fair like] this, but I think they’re not this nice.

Wahidah: I just realized that “Matahari”, “Sun Kissed Skin”, and everything is about nature. But what’s so special is just how it’s literally everywhere around us, and once you realize it, then it’s, like, super fulfilling, and you feel like you’re in harmony with everything. That kind of stuff. So, what’s so special is the connection we have with nature.

Does that have something to do with your busy “Singaporean routines”, so much so that you guys are craving for it?

Wahidah: I think I see it as something more like adding something to your routines because nature is everywhere around you, even in the city. It adds something special like cycling to school. It’s not just going to school—enjoying your time outside. I feel like a lot of people would think of it as like, “oh, I live in the city, that means I can’t go into nature and stuff.” But, I think we all realized that nature is everywhere around us.

I don’t really know much about Singapore, but do you have any nice nature landscapes in Singapore?

Lucas: The trees are kinda everywhere, like on the expressway, like next to highways there is forest and stuff but those places are not super accessible, so if you’re looking for nature, you really have to be looking for it.

Where are your go-to nature spots in Singapore?

Dan: When you live in Singapore, there’s, like, a nature park, where you can just walk for like 5 to 10 minutes because every neighborhood has one. Because I know, in some places, you have to drive just to get there. Singapore is very small, so you can just walk because it’s everywhere.

You have played in so many Indonesian cities (Jakarta, Bandung, Bogor, Yogyakarta), what is the obvious difference between Indonesia and Singapore music scene?

Dan: In Jakarta, even though you play at some small shows, where there’s not many people, the audience is still really enthusiastic. But in Singapore, if there are four people they are just gonna stand still and they are all staring at the wall. Very shy, awkward.

Dan: In Singapore? Yes, just last week. No one was there.

Lucas: It was a conference show, for F1 or something. It was freaking awkward. People were just drinking their beer. After we finished our song, they just looked at us.

Wahidah: No one clapped, that was so weird.

So you had to play for an awkward show like that in Singapore?

Wahidah: For the money? Yeah. Hahaha.

Among those cities you have played, which one is your favorite?

Dan: I feel like… what’s the cold one? Bandung? Bandung was really nice, because it’s like… it’s very cold, and it’s high up in the mountains.

Wahidah: Was it very cold?

Lucas: But for intimate shows, it was Jakarta.

How is it to be a female musician in Singapore?

Wahidah: I think we might not have a lot [of female musicians], at least in bands. There are a lot of female singers/songwriters, but not a lot of female musicians. I think, in Singapore, I feel like I’m privileged enough to say that I don’t really feel a difference, you know? Me being a woman as the frontwoman and someone else being in a band—I think it’s okay. I’m privileged enough to say that nothing has ever reminded me of the difference I guess.

What about your family? Are they restricting you?

Tell me about the USA tour!

Dan: It was sick! It was very cool. A lot of driving. And everyone’s super nice. We played with a lot of—it was of quite different genres—but a lot of post-rock.

Dan: Except for emo bands…

Dan: Some pop rock bands, but the thing is: to every show, you have to bring your own amplifier and drums—we don’t have that. So, we have to borrow from every opening bands. We have to borrow gears.

How about KEXP? How did you guys end up playing there?

Dan: We did a KEXP before but it’s a KEXP at home.

Lucas: But before this, they put us in their playlist, and then they just email us.

Dan: One day I just woke up and checked my email, and like: KEXP! Ooowaaahhh, shit!!!!

Wahidah: And then the group chat: “Oh my god!”

Dan: So then we made contact with them and when they found out we were going to Seattle, they invited us to go to the real studio. Yeah, it’s very nice, it’s like you know, like, the YouTube videos.

Did you feel nervous?

Wahidah: Yes, yes. Because it was one take.

Dan: It’s live, one take, so if you made mistake you’re fucked.

Do you think it gave you a head start to be known internationally?

Lucas: KEXP is the best.

Dan: They don’t pay you, but they gave you a credit card. It was like US$500. There’s some money inside the credit card. I don’t know if I can say it, but the credit card we used it for like… groceries, or to buy food, gas, vape, and alcohol.

Outside of Subsonic Eye, Jared played in several named bands in Singapore like Sobs and Carpet Golf? How do you keep it together and see your roles in each band? Do you sometimes get mixed up?

Jared: It’s very different because Carpet Golf has to do a lot of math rock. So it’s like a different part of my brain. But here, this one (Subsonic Eye), I just make noise. So, it’s easier. With Sobs, I feel I have to be more focused—on every member, every single part I wrote in the album. But, with Subsonic Eye, I feel it’s more natural, it’s easier for me. It’s like just having fun.

Sobs rarely played everyday shows. I think in the past three years we’ve kinda been doing things in our own time. With Sobs, we spent basically three years making an album. So, in the meantime, in between recording and doing all the stuff, I get to be with Subsonic Eye—it all works out. Hopefully, nothing clashes in the future.

So, you guys have released “Dijangka” and “Matahari” as your first songs sung in Malay. Do you guys consider this political? Or do you just like to write it in Malay?

Wahidah: It was kinda like love songs; I knew I don’t want everyone to know what I am singing about, so I want to restrict the more people who understand what I sing about. Yeah, I feel like there wasn’t a lot of Malay alternative music, at least in Singapore, so I just wanted to go back to my roots and write something Malay.

So, it’s kinda political for you?

Are you going to have any upcoming releases that have Malay lyrics?

Wahidah: I think in our upcoming EP—can I say it’s an EP?

Lucas: An EP in, like, January? [There will be] like three songs. [Apparently, they have released it on November 17th – Ed.]

Wahidah: One song is semi-Malay. My Malay vocabulary is very small, I don’t know how many songs I can write in Malay. But, if I find myself writing a song and I can’t word it in English, I just write it in Malay instead.

So, when will the next EP come out?

Wahidah: January. One semi-Malay, and the rest is in English.

Stream their latest music on your favorite music streaming platforms.