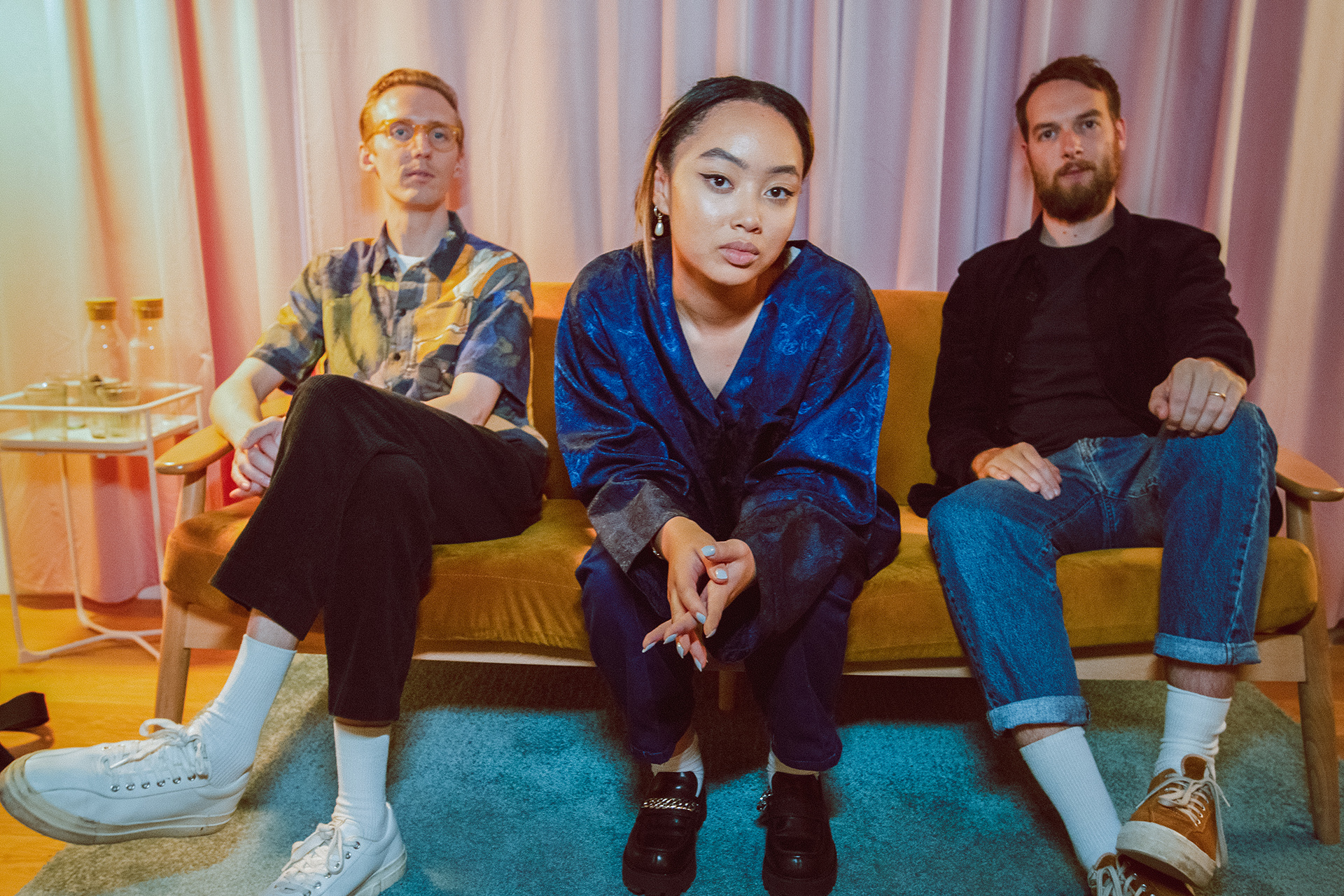 We caught up with the UK pop star Griff to talk about her latest single with Honne, the importance of having creative control and fashion.

With the emergence of up and coming musicians out there, it’s always exciting to see new sounds being released for us to discover. Especially for pop stars, their collection of catchy singles paired with interesting personality and social media presence undoubtedly will make them become the talk of the town. That’s where the UK-based artist Griff is currently at. Dubbed as “Pop’s Next Big Star” by Vogue, ever since her debut single “Mirror Talk” in 2019 her path has only been onwards and upwards. We recently had the opportunity to chat with her regarding her newest collaborative single “1,000,000 X Better” with Honne, while also discussing on the importance of having full creative control on the things you put out and Tik-Tok.

This pandemic doesn’t seem to hinder your productivity as you’ve released several singles this year and filmed a music video. With all these “limitations”, how has it been affecting you creatively?

It’s been a mixed bag. At the beginning of quarantine I was really excited because the way I started writing songs was just me producing in this music room. So I was like “Oh this is going to be a great opportunity for me to just be by myself again and write songs the way I did when I just got started.” And then it came, and then honestly I didn’t feel creative at all. I didn’t feel like – it just felt weird to be writing love songs or break up songs when the world is going upside down. So musically, I don’t feel like I’ve been that creative. But like you said, I think it’s been a fun challenge to figure out other ways to be creative, like figuring out how to film my music video when it’s just me on my iPhone. That felt like I was being creative in different ways.

How was the process when you were filming the music video?

I worked with an amazing creative director called Imogen Snell and we were just kind of talking through ideas and we put together a storyboard. Tripods and lights were delivered to my door but it’s me basically in this room, with my iPhone, just setting it up and then through the whole day I was on Zoom just like this with a camera guy and Imogen. They were basically just telling me like “Okay, put the smoke machine on. Put the projector here. Put the phone here.” And then I just had to do it myself. But it was really fun.

Yeah. And I just kind of had to do what I was told, they’re like “Angle the projector more towards the ceiling”. It was good, it was fun.

You also produce a lot of your own music. How did your journey into being a musician start? And how have you grown as a musician over the years?

I always say it started for me just by going to church every week because I think as a young kid that’s where you experience live music every week and I fell in love with music. And then after that I started learning piano, guitar, and my mom tried to do that really strict Asian mom thing where she wanted me to do all my grades by the time I was 10. But it didn’t really happen because I think once I’ve learnt the basic four chords, I was like “Oh I can now sing Taylor Swift songs and I could write songs!” I reckon by the time I was 10 I was writing really rubbish songs all the time.

I was in a few bands but they didn’t really go anywhere. By the time I was around 15, I was done with all the bands and had gone solo and just started producing when I wasn’t in school, probably when I was supposed to be doing my homework. As I got older, I travelled into London and was just working with any producers that would work with me. I think when you start working with other musicians, that’s when you build a bit more of a network and my music got around a little bit more. I ended up signing a deal when I was 17 but then I was still in school. So then I had a year of my exams to finish and then I released my first single “Mirror Talk”. That’s a long story short.

I think that’s quite difficult for you to balance between school and music while you were still doing exams.

It was hard. I was definitely tired towards the end of it because I was taking my last exams but then I don’t live in London so I was doing 3 lessons in the morning, commuting into London, meeting a producer I’ve never met before, trying to write some kind of song, then travelling back from London in the evening – maybe fitting in an essay and then doing it all again the next day. It was definitely a lot but it was fun to do.

What stood out for us is how you have full creative control on the things you put out. What does this say about the type of artist you’d like to become?

I just want to put out things that feel 100% authentic to me, so that means that I have to have full creative control in everything. And I want to be the kind of artist where people look back on the music and can resonate that as a timeless song or can look at my music videos or any kind of art that I put out and find it incredible. I hope it feels timeless and significant.

I guess it’s also rewarding to be able to say that “I did everything in this project”.

You’ve recently released “1,000,000 X Better”, a collaborative single with Honne. Tell us more about the track.

Usually I feel like collaborations happen when my team or my manager speaks to someone’s manager or their label and that’s how it usually comes together. But this actually didn’t happen that way. They just DM-ed me on Instagram and said they loved my music and I was super star-struck because I’m such a fan. My favorite songs of theirs were “Day 1 ◑” and “Crying Over You ◑”. I didn’t even realise that they’re from London, so I was just like, “If you’re ever in London and wanna write, just let me know.”  They’re like, “We live in London and we’re not on tour at the moment.” So the week after, we ended up getting into the studio and we wrote this song and I think the production felt too Honne for me to release it and I think the song was a bit too pop for them to release it. So it felt like the perfect collaboration to release together.

How long did it take to create this single?

I reckon – so when we first got together we wrote basically the whole song other than the second verse. And then actually we happened to be in LA at the same time around February and then we got to a studio and just quickly finished the song. So this song was pretty much done in the early beginning of the year and then it was just kind of sitting there and we’re both just finding out the right moment to release it. Now is the right moment.

As it is a collaborative track, how was it in terms of the amount of creative input you had in producing this track?

The way we discover new music has completely changed thanks to the algorithms on digital streaming platforms. As an emerging musician, how do you overcome this?

It felt like it’s actually not boxing people in, I felt like it’s giving us a bit more freedom because the way we discover music is also on social media. I feel like artists have a lot more power than they ever have before so it’s quite empowering. And I think you’re seeing so many artists release music without labels doing really well on streaming services. I think this is probably the most exciting time to be an artist – for me, releasing music – because you can completely control what you want to say, what you want to do, what you want to put out, and let the world discover in that way.

I see that you’re also quite active on Tik-Tok, what do you think of Tik-Tok being the new type of platform for you to show your process?

I hate it (laughs). I’m not used to it at all. I feel like an old woman – and I’m not old. But I feel like this is the younger generation that understands Tik-Tok and I’m just trying to work it out and get on board with it. But it’s definitely fun, but I think I just need a moment to find what it is that I do on it, and do it well.

Speaking of fashion, clothes are an important tool to present who you are. Based on the looks you’ve created, how would you define yourself?

Honestly, I love a bargain, so I love secondhand, vintage, cheap, and fun – not too serious. I think it’s important to just wear things that are fun. People can’t quite work it out, but it’s fun.

I’ve seen your dresses. I think you have an affinity towards ruffles and vintage bridal wear.

Definitely, yes. I love my oversized, super playful, big dresses because it’s fun. People are like, “That’s not really what’s cool to wear” and I think it’s just fun to not be too serious when you get dressed.

And it’s nice because you could dance on it.

Exactly, and you just feel like a 3-year old again in a big princess dress and it’s super fun.

What can we expect from your upcoming music?

More collaborations. We’ve got more collaborations for the end of the year. We have a dance song next and we have something Christmas-y lined-up as well. So, stay tuned, it’s very very exciting.