Understanding Grime with Nathan Gerard, The Man Behind Preditah 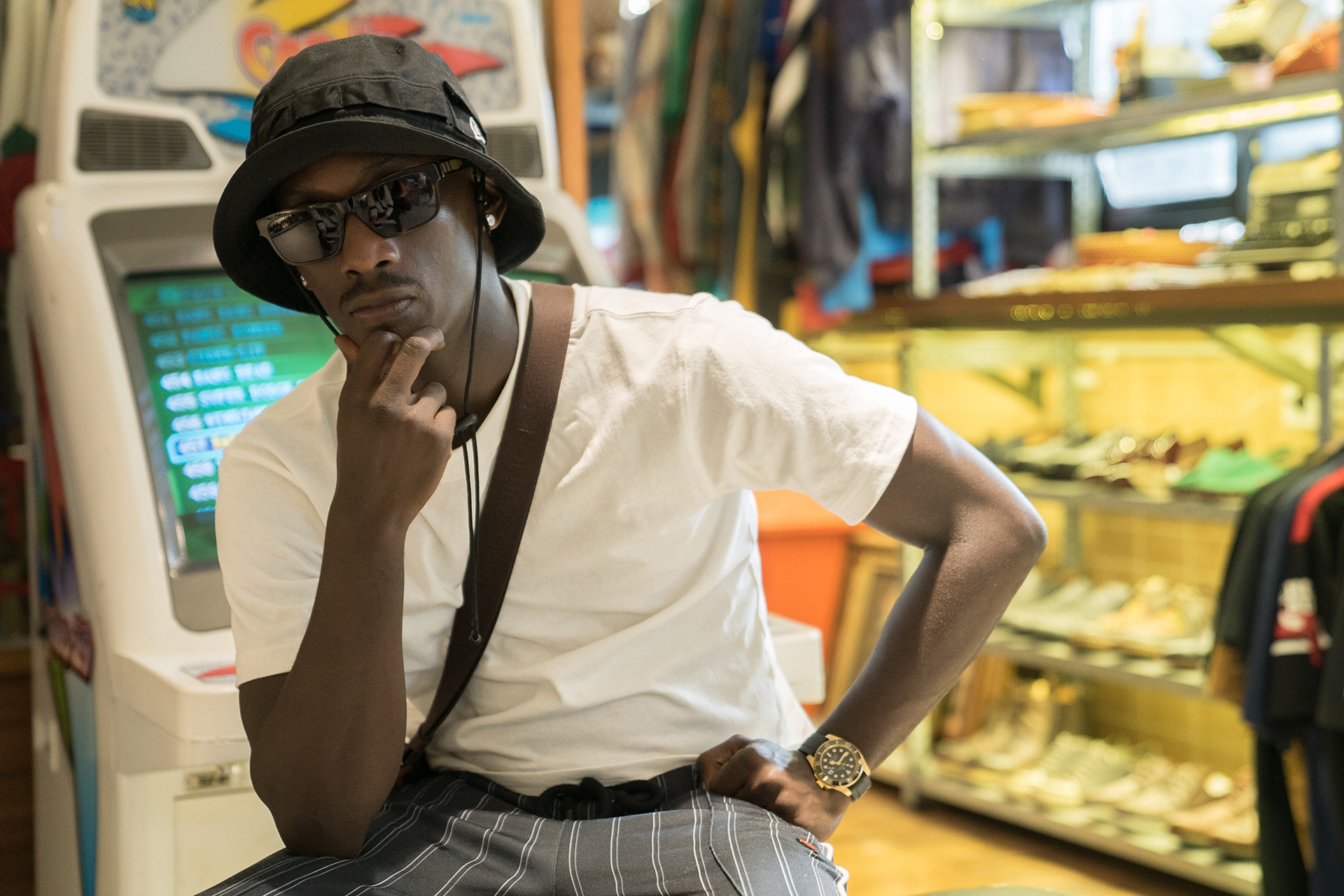 Understanding Grime with Nathan Gerard, The Man Behind Preditah

Refusing the label, embracing the sound.

In the scene of UK club music, Nathan Gerard a.k.a Preditah is a man that needs no introduction. Started from producing grime beats in his hometown of Birmingham, getting recognised in London by the founders of the genre doesn’t satisfy him; instead, it pushes him to explore other sounds. Since his days of making beats for MCs to currently composing music with other musicians, Preditah makes it his personal battle to not be pigeon-holed. After his set at Hotel Monopoli, we had the chance to chat with him at Footurama to learn more about Preditah – the musician, not the grime producer.

When I listened to gospel it inspired me to not do it. It is only now that I am older that I actually appreciated it.

Growing up, you were quite influenced by gospel music. Is that why you got into this genre as a producer/DJ?

No, actually it is the opposite. I got into grime because when I was younger, I wasn’t really – that (gospel) was what I knew. Grime was the opposite of that, it was my rebellious – or not rebellious, but it was sort of felt more like my age. It was new. It wasn’t called grime then, it was called garage. It was what I was listening to, so when I heard garage it was like that sounds more like me. When I listened to gospel it inspired me to not do it. It is only now that I am older that I actually appreciated it.

That is why my music is different now than it was, because I’m into music more now than I was then. Does that make sense?

Right, but does that gospel part influenced your music making process?

Yeah it does now, but back then when I first started it didn’t. Because when I was younger all I knew was gospel and reggae in my house, so it didn’t inspire me. It made me – when I heard garage and stuff like that, that sounded quite young. “Oh that sounds more like me”, because I was like fourteen – fifteen years old.

How would you explain grime to people that are new with it, especially when it is often get mixed up with the general sound of hip-hop?

It is an experimental genre. It stems from obviously, sound boy culture, which is obviously reggae culture again, a lot of bashment I should say. But in terms of the UK, MC-wise it is inspired by German-based and jungle, but production-wise it is inspired by everything – like anything. That is why the sound is evolving, because grime isn’t like – it doesn’t have to be – it has got different elements to make it grime. It is about the energy, really, that makes it grime.

Does it have any distinct voice/sound that people can look out for?

Not in a production, but in terms of the artist, I don’t know, it is hard to explain what it is. If you hear it you will know it is different, it has got a different energy.

I see. But what about the London/Birmingham difference, was there anything particular with it?

Not really. There wasn’t even any regional sounds or anything like that, it is just – production-wise there isn’t, MC-wise yeah because there are accents, different accents. But content-wise, in any genre it is the same.

One of your most celebrated tracks was “On My Mind” with Jorja Smith. When you started working with singers, it broadens your interests in that you don’t want to be exclusively dropping instrumental EPs anymore. Can you elaborate on how did that change happen?
There’s a melody going on, there’s no limit to what I can do production-wise
Working with singers, because they are singing, there’s no limit to what you can do. But with MCs, it is monotone, after a while I got bored with working with MCs because it was quite limited to what I can do. I was the musician in it so all I care about is the music. So after a while I got bored of just making beats for MCs to spit bars over it, so I started working with and focusing on making songs rather than just making beats and tracks for MCs.

When singing, your voice is like an instrument, isn’t it? So there’s a melody with that. Because there’s a melody going on, there’s no limit to what I can do production-wise. But with MCs it is monotone. They’re rapping or spitting bars, so that is limited to what you can do with that. It is not actually limited, but for me I think it is because I am a musician, right. It becomes less about the music and more about the rapper. But when there’s a singer, it is about both. I’m not saying that it is not about both if you’re a rapper, but if you are singing – I don’t know, I just prefer working with singers now.

I’m a musician, so I know how to make music from scratch, so that’s all it is

But have you ever experienced in working with samples before, and what was that like?

Yeah, when I first started making beats I used to go over remixes, anything just to practice. I didn’t release anything, I was just practicing how to make music, because no one taught me so I didn’t know anything. I remixed things for no reason, just to learn how to do it in a sense. And I’ve stopped working with samples, it is all just from scratch because I figured out how to do that.

If you had to choose between the familiar intimacy of clubs versus the massive excitement of festivals, which one is your preferred crowds and why?
I prefer to play to people that want to party rather than to spectate
There are pros and cons to both, playing to intimate crowd is – it has got more of a vibe, playing to a massive crowd it is more about exciting them or hyping. I don’t know, they’re both the same in terms of just trying to get a reaction out of them. If it is intimate it is more intense, because it is more focused on just closeness, but when you’re playing to a massive crowd you kind of got to entertain them more, you can’t just stand there and DJ, you have to do backflips or have MC or bring out people. It depends on what genre you are playing, if you’re playing house music and stuff, then you don’t really have to do all those prop stuff, but if you’re playing grime and stuff then I don’t know, like maybe it’s good to bring out a few artists and excite the crowd. There are pros and cons to both, they’re pretty much the same though.

Right, because people that come to spectate they are expecting something more.

Yeah, like something is gonna happen, and when it happens they take out their phones. But away from that, they’re just standing there watching me. And that’s everywhere, like that happens everywhere, everybody’s like that. I love to play to people that has come to party.

Does the different venue affect the music/set that you’re playing?

It is all about technology, music is going with technology.

Electronic music being the mainstream choice in the music industry currently, how do you think its current popularity will affect its development, particularly in collaborations with other popular genres?
It is better to learn an instrument because then you can apply both methods to electronic music.
It is impossible (that electronic stop being the mainstream). It is all about technology, music is going with technology. So obviously back in the seventies or eighties, there was a limited amount of technology. When the MPC was invented – I think in the eighties, maybe early nineties – that’s when people started experimenting. People couldn’t afford to buy electronic stuff, like those MPCs were really expensive and new. But as time goes by – it is just like mobile phones, so is how to make music. It is not really about playing the drums anymore, or playing the guitar. Everyone just has it complete, you know? And that is why everything’s electronic now.

Music is going with technology, as long as technology has got more developing, then so is music.
But, I still tell producers that are new today, learn an instrument. It is better to learn an instrument because then you can apply both methods to electronic music. If you just make music off a computer, you don’t know how to play a piano or play a guitar or anything, to me – not that you’re not a musician – but you’re not really a musician, you’re just an IT person, almost. You know how to use the program, but that doesn’t – it is almost like you’re driving on this (pointing to the game console), but you don’t know how to drive in real life. You can drive in PlayStation but you can’t drive a car. If you’re a beatmaker and you can just make beats, that is still great but if you can actually play an instrument that will help your productions on the computer.

Mainstream music is not going to go back to the seventies, but hopefully – I mean there are still bands, there are still people that obviously have a lot of band instrument, but I think this generation is just computer, because the technology is just where it is now. I don’t think it will die down. Just like everything is developing into more technology, music is going with technology, as long as technology has got more developing, then so is music. It won’t go back to where it used to be.

But what about the electronic genre on its own?

I’m not a grime producer, I’m a producer that can make grime.

Right, so what is your current genre of choice, also how do you think it will evolve in the future?

I’m just focusing on garage and house music, I’m not really doing grime, however I still can. Basically, I don’t want to be pigeon-holed in any genre, that’s all. So when people started calling me a garage producer, I might leave that and do RnB. I’m a musician, I can make every genre. And people will hear that, as time goes on. What happened with grime was that I got pigeon-holed as a grime producer, and even today I still get that. So my battle is to break out of that, because I’m not a grime producer, I’m a producer that can make grime.

That is a nice way to put it. So how do you prefer to be addressed now?