Warpaint on Evolving as Musicians and Releasing New Albums 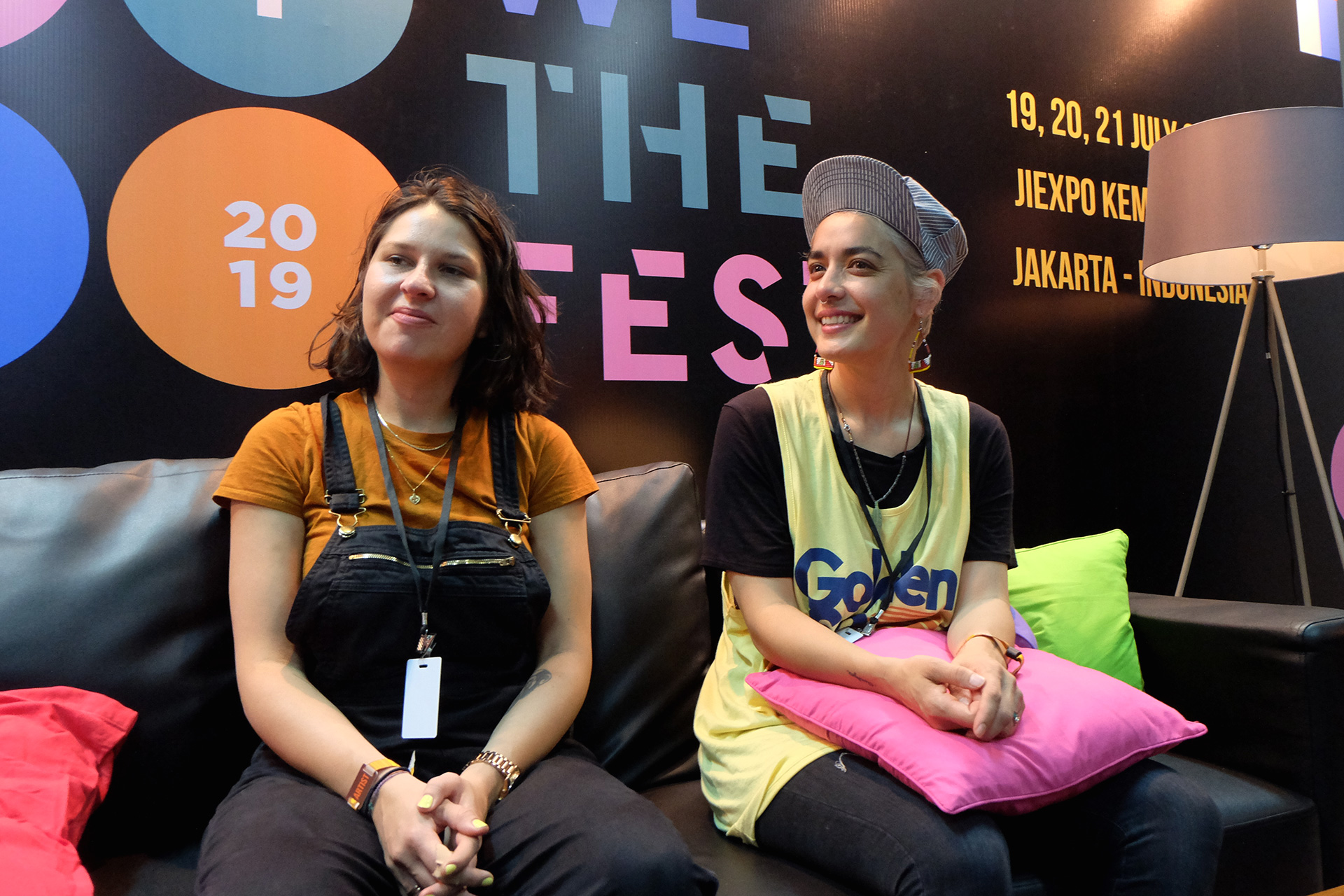 Warpaint on Evolving as Musicians and Releasing New Albums

We caught up with Warpaint ahead of their show for We The Fest to talk about getting creative freedom, opening for Harry Styles and the possibility of a new album.

Entering their 15th year as a band, Warpaint definitely have had more than enough time to establish the kind of sound that could easily be identified as their music. With 3 full-length albums and one EP in their discography, they’re keen on keeping limitations in terms of songwriting and production at bay. Although, it doesn’t mean that each member are without their solo projects, Jenny Lee Lindberg and Theresa Wayman released their own solo albums while Stella Mozgawa and Emily Kokal have collaborated with other musicians in the past years. Returning to Jakarta to play for We The Fest 2019, we had the chance to have a quick chat with Stella and Jenny to talk about being comfortable in self-production, getting outside their roles, and evolving as musicians.

Jakarta is the last city for your run of gigs in Asia-Pacific, although not your first time around here, how has your trip been?

Jenny (J): We just got here last night, so the trip has been great! We had some time to self-care, as we said earlier and it’s very humid here, which is nice. We’re really excited to play.

Congratulations on your 15th year as a band, what was the most ambitious project you’ve ever done so far?

J: I just recently finished producing an album, it’s one of my friend’s. I think that’s pretty ambitious and something I’ve never really done outside of our band and my solo project.

Stella (S): I guess personally, scoring a film. That was a lot more work than I could fathom. It was really – it was an important accomplishment.

What genre was the film?

How do you think the Los Angeles music scene has changed over the past 10 years?

J: Maybe there are a lot more bands than there were used to be. I feel like when we started out as a band, at least in LA, there were far less more people there and there are now. And especially bands, there are a lot of bands and a lot of music and a lot of residencies, so many more venues. And every night, there’s like 5 different shows. It’s definitely become more of a music city than it’s been.

So the music industry there is growing?

S: Yeah I think in terms of bands specifically for sure.

J: Yeah, just bands, maybe – I don’t want to say indie but, because LA is the industry’s capital of the world, that’s where it is, that’s where it’s always been, that’s where the labels, managers, lawyers and a lot of big bands are, but there’s a lot of people coming from smaller cities and there’s just more of a local indie scene there that I’ve ever seen before, which is cool.

Aside from producing music together as a band, each of you has your own solo projects, be it from your own solo album or even collaborations with other musicians. How does this influence your songwriting processes later on when working on new materials as a band?

J: It’s definitely different doing your own thing and doing something with 3 other people. I really enjoyed doing my own thing because it was different from what I was used to. And when we went back to making the last record that we just put out I was – it was very refreshing to me, it was really nice to be able to work with people and especially them because we all have a good rapport with each other and we’ve created music together before but I found that it was a nice change of pace from just being on my own. So I don’t really know the answer to your question, but I think maybe just being more open to whatever’s happening, less rigid, less controlling and just kind of rolling the punches because that’s really all you can do.

S: I fully endorse that.

S: I’ve got nothing left to say!

S: If I speak, it’s just going to be what she said but in a different way.

I think we needed a bit of space. Just a break.

For “Heads Up”, some parts were recorded separately at each of your home studios hence you were able to have more creative freedom with the songs, which was different than how you recorded your second album, could you tell us more about it?

S: Slightly, we did a little bit of that in “Warpaint” as well.

S: I guess we were just more comfortable in that self-production zone, we all kind of got better in making music in our own studios, our own homes, our computers as a way to be able to express an idea and bring it to a certain point of completion. With “Warpaint” it was kind of accidental that some of those things ended up on the record. For some demos we thought we maybe would just redo everything, but then our producer Flood was similarly attached to some of the demos, and so we built from there. So it ended up being a few songs that started as demos as opposed to being started from scratch. And this one we kind of built upon that idea.

J: We were also on tour for an extremely long time. I think we needed a bit of space. Just a break. And in that break, we didn’t just stop making music. So I think in that break a lot of us were making music and then sharing it with each other. Either keeping it for ourselves or keeping it for Warpaint and I think that’s kind of why that happened more since we had more time to figure out.

Your albums have featured instruments that make it sound more than standard rock, is this also because you were trying to capture the spirit of your live performances?

S: Maybe it’s just when you release an album, this will kind of correspond to the question but I have to say this, you do this one interview right before and that ends up being the press release, and every single interview and every single thing you do about an album is based off this very small bit of information. And whoever’s interviewing you that one time will take little bits like, “we were listening to this band” or “this is where we made our album” and stuff and that will forever be attached to that record. But the thing is, there are so many things that we’ve done in the same way before. We’ve always put pianos, synthesizers and drum machines and all these other textures, it’s not a new thing, it’s just that with this record it was the focus of that one press release.
It’s just more fun to not have any limitations and do whatever’s happening. J: It got blown out of proportion.

S: So whenever one reads it they’re like “this is what makes this album so different to all the others” and it’s not a frustrating thing it’s just the nature of the press and the way that things get immortalised I guess. That’s something that we’ve kind of always done and are continuing to do and will continue to do forever. No limitations. If Jenny wants to play a guitar or synthesizer or piano, or I want to play program drums.

S: It’s not like everyone’s staying in their lane because we’re all just trying to make this thing with just the 4 of us so sometimes we have to explore outside of our normal roles.

J: Also be inspired too. It’s sort of like putting each other in a corner, it’s very limiting if we keep on saying “This is your role and this is what you have to do”. Naturally, we’re probably better at those things because those are the things that we do most of the time. It’s just more fun to not have any limitations and do whatever’s happening. Other people would disagree but we have to do what’s right for us.

S: It keeps it exciting for us and that’s why we’ve stayed together being a band for so long it’s because there’s no such thing as “I’ve got to go and start another band or do another project so I could get this particular thing out of my system.” Luckily we could kind of explore a lot of those things within Warpaint.

Speaking of your experience in supporting Harry Styles on his solo tour, do you think choosing a supporting band as a way to introduce new genres towards your audience would give them a better understanding of who you are as a musician?

J: I guess it depends on who it is but I personally have always been pretty open-minded if somebody wants to take us on tour I see that as an opportunity to share our music and who we are as people and musicians and the magic that we have to offer. I like sharing that with I don’t care who with.

What was your reaction when knowing you were opening for Harry Styles?

J: It was pretty random.

There are 2 types of musicians, those who keep on doing the same thing all over again and those who grow and show evolution throughout their career. Which one are you and why is that?

J: I’m going to go with the second one.

J: But, there are elements to the first one because I feel like we have our sound. The 4 of us, the way that we communicate with each other is always probably going to be for the most part pretty similar.

S: We have elements of the first because it is the 4 of us so we will ultimately make this some boundaries to the kind of music that we want to make because there are so many things that I don’t think we’re really interested in. There’s certain types of music or certain sounds that we all wouldn’t necessarily go towards unless we all drastically change.

I think that also applies to fans. Some of them appreciate musicians trying to grow but the other despise if they see some sort of change in them. What do you think about it?

J: To each their own. Whichever you’re feeling. I don’t judge. If somebody’s making rap music and then the next day they’re making country, good. Awesome to me, go for it. That’s so cool that you could do all those things.

Not the one to rush an album, how do you decide that a track or an album is finished and ready to be released?

S: How do we know? We don’t. It’s hard to say, every song is different, every situation is different. There’s no universal answer to that, unfortunately. I wish there was because then we would just know.

J: I would say judging on the last few records that we’ve put out, I think usually when we get to the number 15 when we’re writing or doing something and maybe there’s more about it and we’re like “Okay, solid”, maybe even a little less at times. Or like “Okay, we’ve got a list of things we want to work on” and when we’re in the studio and we’ve reached that number we’re like okay well, there are only a few things left to do to make an album. Because you don’t usually put 15 songs on an album.

What’s next for Warpaint?

J: I would say definitely spring or summer, or no later than summer 2020.

Mobilegirl on Having Creative Freedom and Breaking Expectations