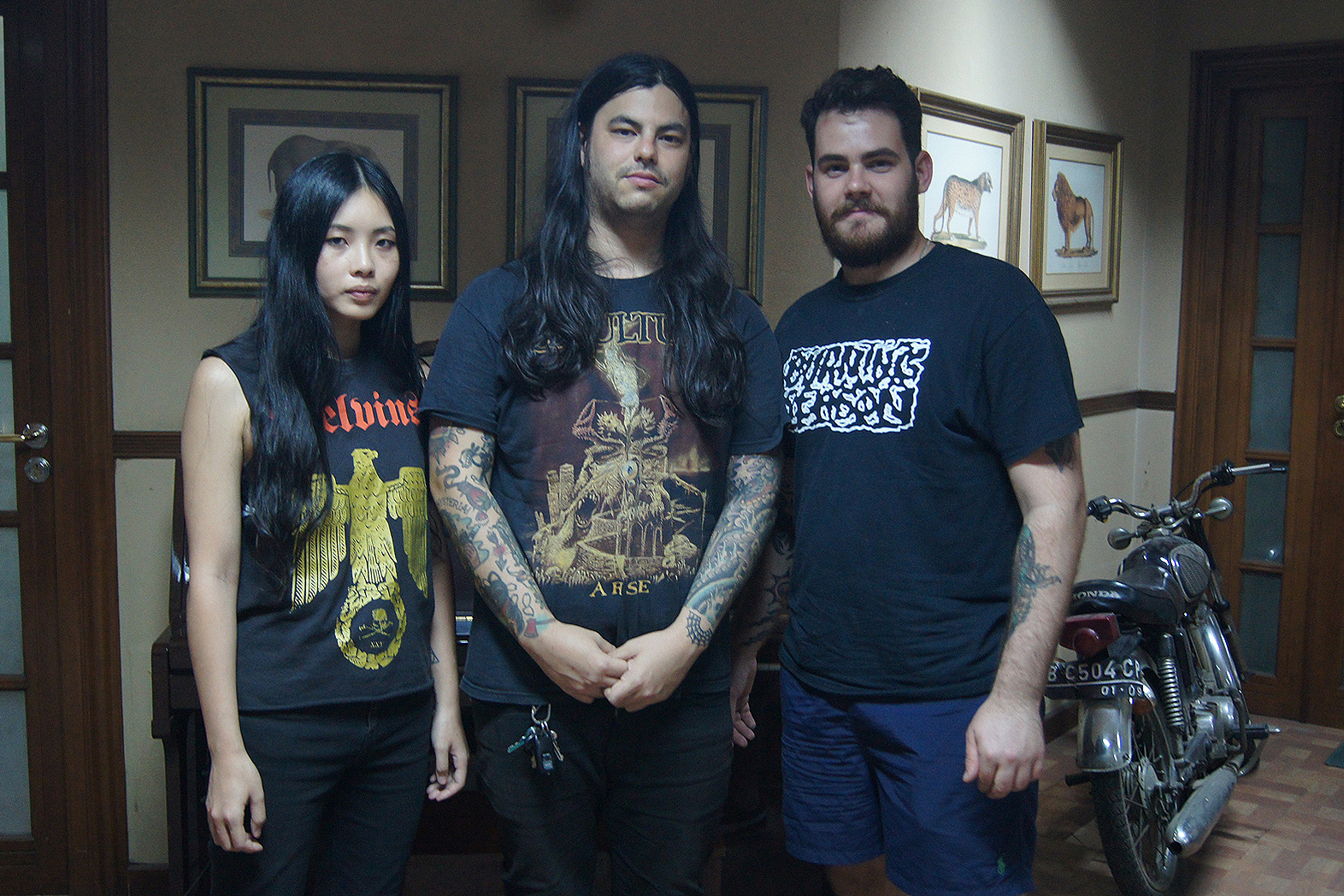 Fun talk with Australian stoner band, Potion during their visit to Jakarta.

Thanks to 630 Recordings, Jakarta became one of  the go-to cities visited by Australian doom band, Potion, during their Southeast Asia leg of the tour with Singaporean stoner band, Marijannah. Choosing Rossi Fatmawati as a venue, Potion played all of their materials including their best new single “Women of the Wand”. We had the opportunity to chat with Potion about Sydney’s heavy music scene, their artwork, and women’s role in a band.

As one of the band that plays heavy music, we are pretty curious about how is heavy music scene in Sydney?
Chris: That’s good. Like there’s a lot of different genres in Sydney, like different scenes for each. It’s pretty splintered in the city, so like the genres kind of stick to themselves rather than here. It seems like they just all play together, which I would prefer.

Lee: Yeah, I think the heavy music scene is really good. There’s a lot of different little scenes like, you know, like hardcore, punk and metal. Metal is kind of, there’s always been a lot of really big important metal bands from Australia, but there’s never been a big community for it, and I think that’s changing. We’re seeing a lot more of a scene developed around metal and it’s nice to be a part of it, I think. Yeah, I think the scene is always more, it’s always kind of more energetic and more excited when it’s younger bands. Um, we both (Lee and Chris) started playing in bands when we were, you know, like 17, he (Chris) was 13.

Chris: He used to come and watch me (laugh).

It is fair to say that one of Potion’s new single called “Women of the Wand” is the new favorite for every heavy music lovers and also the media. Can you tell me the inspiration behind the single?
Lee: When we have our first release, we were just trying to get comfortable playing this kind of music. We weren’t sure if anyone would like it. We weren’t sure we’d be good at it. So the first release before “Women of the Wand” is just more of us learning. So with the “Women of the Wand” we wanted to release something to keep people excited about us while we writing an album. That was like kind of the main point and then we just wanted to kind of develop our own sound instead of just kind of copying our favorite beats from our favorite bands. I guess lyrically it’s just more of the same kind of like fantasy stuff that interest us.

We all know that, song isn’t the only thing that we could expect coming from Potion, you often come up with an artwork that represents you as group. Did you think that artwork could carry the band’s identity or even shape it?
Chris: Oh, definitely.

Stella: It’s really important to us.

Chris: There’s so many bands that sell album cover and I think that probably sounds cool because the album cover is cool.

Lee: We all come from creative backgrounds, like Stella is an artist and an illustrator and I’m a designer and Chris is in film. So the visuals and art have always been really important to us and especially we’re big fans of 70’s and 80’s, you know, heavy metal one. When you’re a kid and you see an Iron Maiden album cover – it changed my life. And we played in punk bands for so long where it wasn’t cool to have an image. We just wanted to do what we wanted to do, and visuals always been really important and that’s what excites us about bands.

Chris: And that it’s another chance for, like, you write the music and that’s a creative kind of outlet. Having lots of different art? That’s a cool way for us.

Lee: The whole band, not even just the music is kind of like an art project. So I think all of it is, the whole package is important to us.

Stella: We like to involve our friends to do the artwork for us.

Lee: We love collaborating. We know so many talented people that have similar instincts to us. So it’s great to be able to work with them and collaborate.

Chris: Collaborating with people definitely helps you evolve as well. So like all of those processes evolve us, aesthetically.

Can you tell us more about women in Australia music scene? Here, in Indonesia, women are more involved now even though harassment still happens sometime.
Stella: Well, specifically in Sydney probably more women in punk and indie bands, not so much like heavy music. I think these day probably more in hardcore as well, but it’s still pretty new and it’s not a lot of women in heavy bands.

Lee: But I think it’s changing and I think we’re seeing especially in Australia – I think globally we’re seeing is there’s more opportunities for women in music and people more open to the idea and more encouraging. For us, it was never like “Let’s start a band with woman in it” because Stella love this music and got me into this kind of music, she also have a big part of writing process and it’s just so happened that she’s a woman. If other bands or people in our community see that and encourages other women to be in the band, and that awesome as well. It’s just a bonus.

Stella: In hardcore I think people a lot more accepting and like look up to the girls a lot.

Lee: We’re very lucky that the community we came from in the bands me and Chris had played in, have always kinda been a champion of women in music. Obviously, harassments still happen. It’s always going to be awful people. I think championing women and putting them in the position of power in the scene it’s important and I think it shows these kinds of people who are going to behave badly and do disgusting things. That’s not okay.

Visiting Asia for touring the first time, is there anything you really want to find or to do through this tour?
Chris: I wanna explore the culinary scene (laugh).

Lee: We’ve come here to eat all of your food. Other than that, I’m excited to watch Marijannah every night as well, because we are a big fans for their album, all the local bands and again, eat all of the food (laugh).

What is it that makes you decide to include Asia on the tour list? Is it pretty much the truth when i say that even though both of the continent geographically located near one another, Australian band often excludes Asia on the tour list. What do you think could be the case here?
Lee: My family is in Indonesia, my father grow up in Jakarta. Stella born in Hong Kong as well, so I think our identity as Asian people is really important and always has been.

Stella: I also just feel like I have never known any Asian like heavy bands, so I just really wanted to be able to play with some.

Lee: I think Asia always be important to us. We always wanna play here and because it’s part of our identity and part of my background. And I think there is a lot of amazing bands that a lot of people in the West notice because they’re not a western band, and I think it’s great that we get to come here and play with all these amazing bands.

Is there any big plan that Potion’s have prepared? Full album perhaps?
Lee: After we get back from this tour, our plan is to work on the album mostly. We still play here and now that our biggest priority. Other than that, we just kind of open to anything that’s happening, because everything is surprised us so far, so i hope it will continue to surprise us.