How Music Helps The Journey of Accepting Ourselves with Jungle 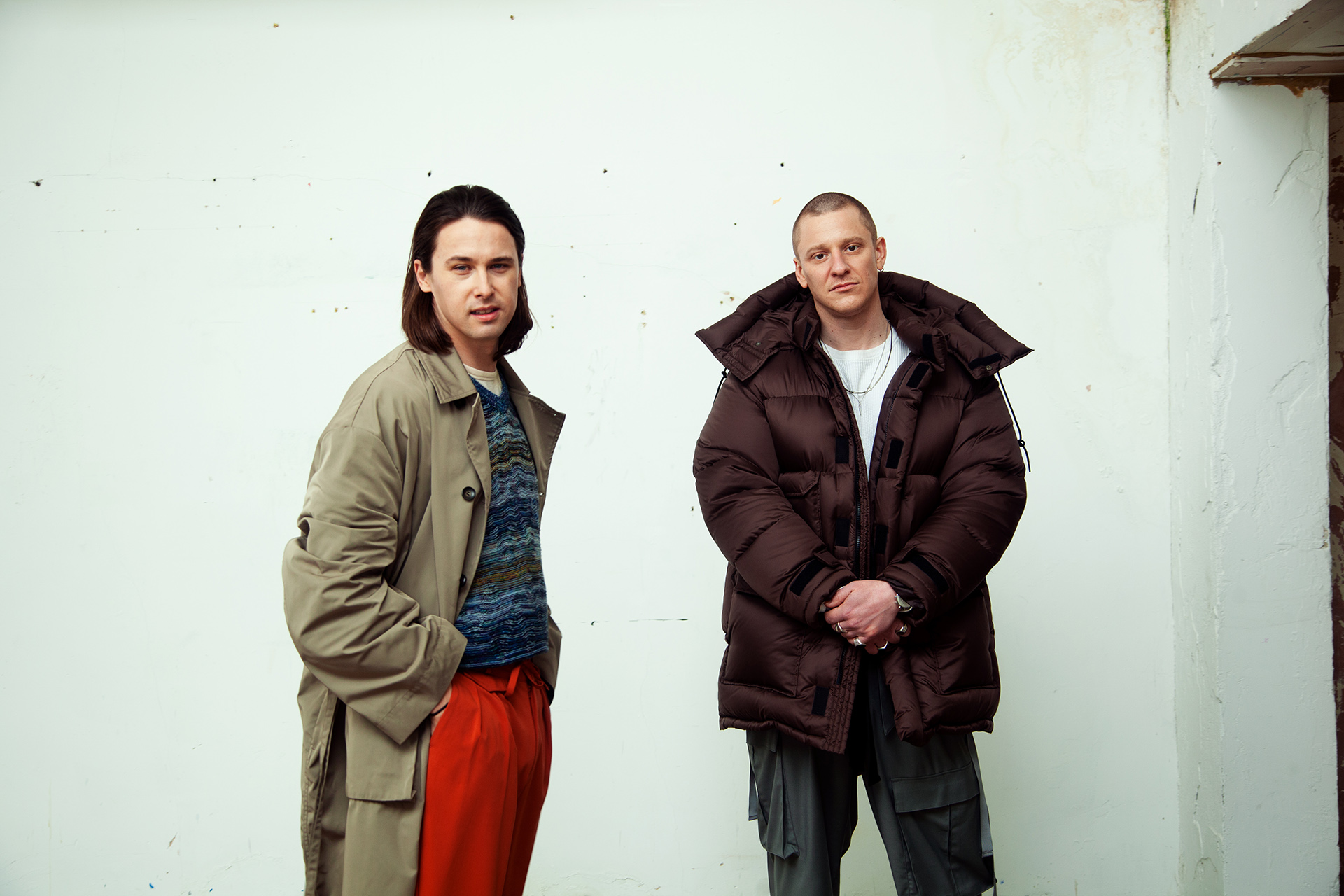 How Music Helps The Journey of Accepting Ourselves with Jungle

We had the chance to talk to Josh Lloyd-Watson of Jungle about their newest album “Loving In Stereo” and building the Jungle aesthetics through music videos.

When British producer duo Jungle dropped their debut album back in 2014 seemingly out of nowhere and shrouded in mystery, they quickly became the talk of the town. Aside from groove and rhythm being the main component in their musical DNA, the duo that consists of Josh Lloyd-Watson and Tom McFarland is also known for their enthralling dance-centric videos which leave us captivated. A few years after their sophomore album, they have finally returned with a new one that’s guaranteed to uplift our spirit for moments to come. I got the chance to chat with Josh to talk about how they have evolved as musicians and how it is reflected in “Loving In Stereo” as well as being inspired by dance to shape their visual aesthetics.

At the beginning of Jungle, you presented yourself as somewhat a ‘mystery collective’ to the public. While some might say this approach as being counterproductive, what was the reason to stay behind the scenes for a bit back then?

We’re Aquarius. Both T (Tom McFarland) and I are Aquarius and it has a very hermit-like feature. We’ve also got Leo rising in our personalities which is quite a performance-based star sign. I don’t know if you know any Leos, but they tend to be quite outgoing and want to be the centre of attention. While for Aquarius, in their true heart, they want to be at home inside, in their bedroom and their caves. So that is also ultimately what Jungle has, it’s got this element of [like], “We’re just going to be in the studio, we don’t really want to be around other people.” But at the same time, we’ve got this performance element.

There’s this dichotomy where Jungle’s quite outgoing and wants attention, but at the same time we sort of prefer to be in our own space. I don’t think fame and notoriety are that important for us, we like escaping into the music more and I think with Jungle, it’s like Daft Punk in some way.

The logo was so important to us because we could escape from our own ego and who we were at that point and I think that was super important to help the creative process because if you bring yourself into it too much, you’d take it a bit too seriously. There’s a freedom within creating for Jungle because it’s sort of bigger than you and that allows you to be like, “We can do anything here.”

As a project, Jungle exudes the spirit of collectivism and friendship, which is also reflected in how you often use the same cast and collaborators in your shows and videos. Was there a certain narrative that you were trying to push forward – some sort of a Jungle story?

Ultimately, they’re just music videos and they’re supposed to be entertaining. In some ways, we see it a little bit like Gorillaz but we don’t have cartoons; so the cast, the crew and the videos have to be entertaining.
We’ve always been intrigued by dance since the beginning.
We’ve always been intrigued by dance since the beginning and it’s always been something that inspired us. At the end of the day, I want to watch a video and be inspired by it. And to do that, going back to being producers at heart, that’s really what we are. It’s always been a production duo. It’s always been us at the heart of it, making music, in the same way Daft Punk or Justice would – and in some way, Disclosure too.

We see the videos as like some sort of a Netflix series where you have these characters and you fall in love with them and they inspire you. Each song is like an episode and we have a different focus, perhaps, or it follows a different character through that episode and they perform what ultimately is dance. So there is a simplicity to it in that way.

There’s something about third albums that seems to encourage musicians to become more of themselves. Does this apply to your upcoming album as well?

Yeah, I think so massively. The first one is like something you make, [where] you had your whole life to make a record and you’d spent a long time doing it. It’s got this naivety to it, and it’s got this kind of beauty to it where you don’t know. You don’t have any fans on the first record so when you made that you’re kind of oblivious and naive.

With the second one, you then have success and you’re trying to repeat that success in some ways. You try to copy the first one in different ways and you’re then unsure whether you’re doing the right thing. A lot of doubt comes into the second album because you question what it is that brought you success.

Then on the third one, you realised that it’s just you who brought the success. It’s your taste, it’s what you make in your heart, it’s your creativity and you have to then trust that. And I think that trusting yourself is the thing that opens up the door to things being more honest and more yourself whatever they tend to be. For us, in the third record, I think it was about opening up the roof. There were no boundaries and rules of what we could be or what music we could make. And I think it was just based on what we like rather than what we think other people like. I think that has then put songs on the record which sound amazing, which really make you feel good and confident, and really direct in terms of what the approach is. These songs in this record are the most honest, and also the most direct-sounding, I suppose. It’s what Jungle is always supposed to sound like, it’s just executed well.

In a recent interview, you mentioned how “Loving In Stereo” is more focused on a feeling, an energy or a specific moment. How would you describe the phase that you’re at as a musician through this album?

I think it’s about spiritual growth, love, positivity, hope and uplifting feelings. But funnily enough, [it] coincide with where the world is currently at which was kind of serendipitous and kind of happened by chance. We weren’t really writing it for the world, we were writing personal feelings. So in terms of where we’re at, we’re at a really good place. Things aren’t too serious, and we don’t take them too seriously. It shouldn’t be too serious, [because] at the end of the day it’s music and it’s supposed to make people happy. It’s also supposed to be fun and carry people through times in their lives and soundtrack other people’s lives as well as our own.

These songs in this record are the most honest, and also the most direct-sounding.

Your music videos play a huge element in building the Jungle aesthetic, with dance being a main form of expression. Has this always been your plan? Also, were your music made with a certain type of movement or personality in mind?

I don’t think [of] certain dances, but yeah I think dance became a thing. When we find a hook, it’s like you do it again and you get good at it. If you keep changing the idea, then I don’t know, it starts to become weaker and weaker. For example, if we hadn’t done dance in every music video, we wouldn’t be talking about the music videos. We just wouldn’t because you’d be like, “Yeah, it’s cool that you make a lot of music videos and they’re all random.” There’s no theme and there’s no identity in that.

I think with the dance and the stylistic shooting of those videos, it’s a conscious thing to do it, then do it again, and to do it differently and with different people, dancers, and different styles of dance and themes. There are different levels of what you can do with it and ultimately it’s really rewarding when you get it right, like with “Casio”. That video’s amazing and it’s so simple. There’s only one camera and six people, and it’s all about the performance. I think that’s what we love about it.

It’s always fun to watch your music videos because it’s a whole package of good music and amazing dance performances.

The thing is, I used to love Michael Jackson videos, for example, I watched “Beat It” and
“Smooth Criminal” when I was fourteen. It’s amazing to watch and it’s on another level. It’s just so inspiring, it makes you want to be able to move like that.

Jungle’s live shows are far from being underwhelming. What was the consideration that led to the decision of having a supporting band?
At the end of the day it’s music and it’s supposed to make people happy.
We’ve always been obsessed with big bands, whether it’s Earth, Wind, Fire or Arcade Fire. The energy of those people on stage, they’re all shouting and it’s so powerful. That’s inspiring. You get inspired by stuff and you want to bring that into what you do creatively so that’s what it is, quite simply. It came from sort of Arcade Fire mostly. We’d been Arcade Fire fans when I was about 17-18 and always wanted to be in Arcade Fire because they were just shouting. It was kind of aggressive and I think this album is really kind of living up to that now.

I’ve been watching your live videos on YouTube and it’s always been fun to look like as well.

For sure. We just get a bunch of our friends to play with us and we got some old and new people with us. Some of the old people from the old band, they’ve gone to do their own solo projects and now we’ve got some new friends with us which is going to be really exciting. It’s just fun.

You’re going on tour with some amazing acts starting in September, how does it feel to finally be able to play live after a short while?

We were making a record anyway, so we had the time off. We were lucky, in some way it was like part of the plan. But it’s sad what happened, it’s sad that so many people had been affected by it and the music industry struggled to kind of survive.

Lastly, what should your fans expect from your music and shows in the future?

I don’t know (laughs). It’s difficult to say because we don’t know yet. Different things, new things. I think it will always evolve. It will always have the heart and soul of what Jungle is, but the sonics may evolve, and the deliveries evolve as our taste evolves. That’s it basically. You can’t really tell until it’s made. I don’t even know. I’m always looking for something that shocks and surprises me. So I don’t know what it is yet, but it’s about experimenting and when something is really interesting, it hooks you.