Going Beyond Shoegaze and Getting Personal with Hatchie 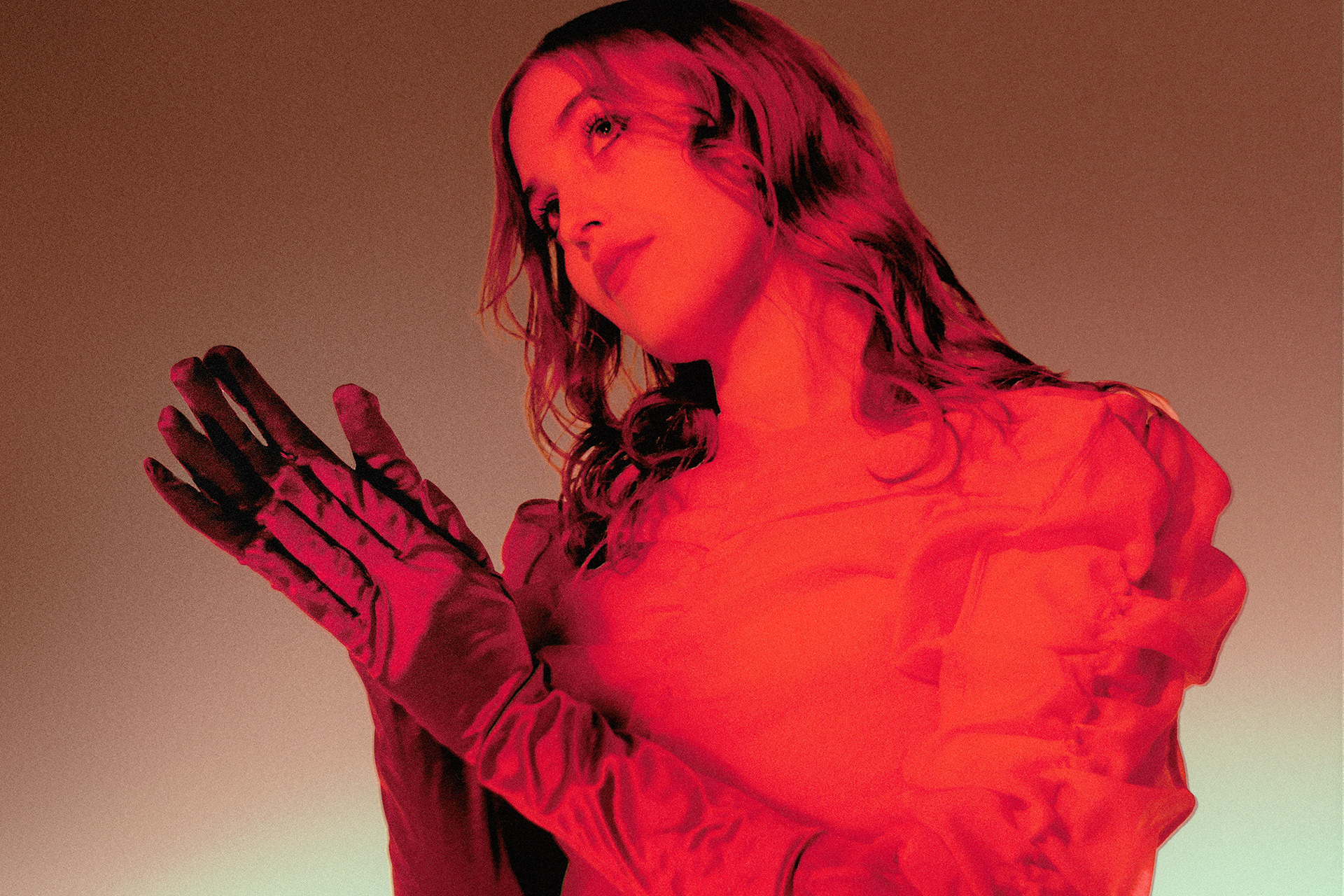 Going Beyond Shoegaze and Getting Personal with Hatchie

We had the chance to speak with Hatchie to talk about how her latest album “Giving The World Away” lets her become more in touch with herself, the resurrection of shoegaze, and the harsh reality of being a musician today.

When Harriette Pilbeam first released her debut EP “Sugar & Spice” under the moniker Hatchie, it was as if we were going back to the times when the ethereal sounds of shoegaze reigned. Bringing back nostalgia to the sounds of today, she has returned with her latest album “Giving The World Away” accompanied by newfound confidence and a refreshed outlook on how she would sound sonically. Under the pretense of “trying new things”, this album sees herself departing from the shoegaze/dream pop bubble as well as her first time co-writing with producers Jorge Elbrecht and Dan Nigro.

I had the chance to speak with Harriette Pilbeam in the midst of her upcoming Australian tour to talk about how her latest album lets her become more in touch with her core, the resurrection of shoegaze, and the harsh reality of being a musician today.

This album marks your first time co-writing with other producers (aside from your partner Joe Aguis) such as Jorge Elbrecht and Dan Nigro. What was the trigger that made you let them into the whole creative process?

We went on a writing trip to Los Angeles in February 2020, and we met up with all those different writers. We wrote a few of those tracks and realized that we were really good matches with a couple of them. So then, we decided to do the whole album production with Jorge as well. It worked out nicely and it kind of just all started there.

How was it like sharing your vulnerabilities and opening up with other collaborators?
With the second album, I just wanted to try new things.
It’s definitely weird at first. It takes some getting used to and you have to just trust that they are not going to judge you for anything. And that’s why I preferred to write with Joe Aguis for the first few years of the project as well because I knew that I could relax around him and be vulnerable. I think it’s just a matter of letting go of your inhibitions and trusting them.

Although it is technically your second album, “Giving The World Away” feels like a third. And with that being your third release, there’s something about it that seems to encourage musicians to become more of themselves. Does this apply to your album as well?

Yeah, definitely. It feels like my third album for sure because the first EP had a such strong reaction and we toured around the world just for that. I feel like I’ve been doing this for years, and it’s only been five years.

This album certainly presents an interesting juxtaposition between tracks; some go on a darker tone while others have an anthemic pop feeling. Do you see this as your own ‘growth’ as a musician and a departure from your dream pop/shoegaze era?

Yeah, definitely in some ways. I did make sure to include some songs like “Sunday Song” to kind of pull it back into that dream-pop world because I didn’t want it to be like a totally different artist. I wanted it to still fit in the other worlds.

We just tried to balance them, I guess. It’s kind of hard because once you’ve heard the song so many times, you feel like you’re not looking at them from an outsider’s perspective. You’re kind of stuck inside of them, and you cannot really see them for what they truly are. So, it can be hard to step outside of that.

It’s talking about self-realization, self-respect, self-esteem, and just kind of understanding yourself as you grow into young adulthood than from being a teenager.

Following up, if your previous albums are talking about love and heartbreak, how would you describe the themes on “Giving The World Away”?

I think this one is definitely addressing a lot of personal issues that I’ve been going through since I was a kid and a teenager. It’s talking about self-realization, self-respect, self-esteem, and just kind of understanding yourself as you grow into young adulthood than from being a teenager. I’m in my late 20s now, I am almost 30, so it was important for me to acknowledge a lot of the things that I’ve been dealing with.

Aside from “Quicksand”, “The Rhythm” is also one of the stand-out tracks in the album – especially how the progression goes during the bridge. Could you tell us more about the track?

I started writing “The Rhythm” with Joe, my songwriter partner. He started it by himself and then I helped him finish it. We wanted to write a song about finding your confidence as an adult, and as a woman, in particular. Confidence is something that I’ve struggled with a lot and something that I was trying to get better with. I kind of adopted a “fake it till you make it” mentality. So, even if you have to fake being confident, it’ll help you become more confident in the end. That’s what it was about. We wanted it to just sound really big and boisterous, and for it to have a swagger. We wanted it to be fun and kind of making fun of itself in a way, too.

It seems that your music goes hand in hand with your videos – and each has its own distinct imagery on it. “Lights On” feels like a Prada fashion video, while “The Rhythm” is like watching a ‘90s European rave video. How important it is for you to expand your songs’ narrative through video format?

Yeah, it is. That’s exactly what we were going for with those ones. We wanted the “Lights On” video to look like a fashion video, and we wanted “The Rhythm” to look like Top of the Pops. So, I’m glad that you picked up on that. We love those influences and I love old-fashioned editorials from the 90s.

We really feel a strong connection to a lot of those UK artists who did a lot of those performances on European and British shows like Top of the Pops, so, I’m glad that you saw that.

Do you write the song first and then you envision the video or is it the same?

Sometimes, it’s the same. But usually, we do the song first, and the video later because we are just not sure which songs will have the videos. When we were writing “Lights On”, I wanted the camera to be going around me. We didn’t exactly do that but were sitting on a rotating platform instead so it felt like the camera was going around me, but in reality, I was the one who was turning. That was an idea that I had from the very beginning.

Sometimes, I have ideas and they don’t happen. I really wanted to do a rain machine, so I would be singing in the rain for the bridge of “Lights On”, but that was obviously a lot of effort, time, and money. Which we didn’t have, so weren’t able to do that one.

Shoegaze has been on the rise, again, partly because of TikTok. How do you see this resurrection?

Lately, there has been a lot of discourse globally about how streaming services don’t pay well. In Indonesia, often musicians are forced to become their own ‘content creators’, and still be productive in creating music, while also holding full-time jobs to support their own livelihood. How do you see the reality of being a musician today?

There are so many really difficult elements to being a musician today. It’s harder than ever to be a musician. In some ways, it’s great that anyone can download a program and use a laptop to make music. I think that’s great but in terms of the industry, how it works, and how competitive it feels, it’s really hard. There’s definitely a lot of pressure to be a content creator and to be an influencer as well as a musician – and I don’t want to do all of those things. I just want to make music. But I feel pressured to make TikToks, Instagram reels, vlogs, Youtube videos, and things like that. That really doesn’t come naturally to me, and it’s really sad.

Honestly, it’s really overwhelming at times and it definitely makes me want to quit sometimes. Because it feels like there’s no point. If you’re not willing to do that stuff, then someone else is willing to do it. It’s definitely really hard and it’s something that I’m still figuring out myself. Hopefully, if we push through, in the next few years it might get better again. When everyone realizes how fake it all seems right now.

It’s harder than ever to be a musician.

Do you have any messages for artists who are in that position?

I would say to just find what you really want to do and don’t follow trends. Just do what really feels real to you and what you feel pulled to do. Don’t just do what’s cool at the moment because if you do that, it’s not going to be cool in six months’ time. And you’ll just be stuck on something that isn’t authentic. Just do what you want to do.

You have also launched a Patreon page to digitally connect and share updates on your project with your fans, Hatchlings. How has it been so far?

It’s been really nice. It’s another element of feeling like I have to do these extra things on top of just making music, but it doesn’t mean that I get to make a living off of it. It’s been really fun connecting with everyone and having a really strong bond with all my fans. I do live streaming, QnA, vlogs, and I send out playlists every month. It feels really personal and supportive. It’s been really nice.

It’s safe to say that you have more songs now to release in the future after your latest album?

I have a bunch more songs I’ve been writing. I’ve been writing a lot lately. Last few weeks, I took a bit of a break from writing, so that I could kind of have some space and start fresh. But, I’ve got a lot of new songs and it’s so very exciting.

While you’ve done the CAN/US tour last May, you’re starting the Australian tour by the end of this month. How do you feel finally playing your latest album to a crowd at home?

So good. We did a few shows before the album came out earlier this year and they were so fun. I think everyone was just so excited to be back watching the show and the energy was really high. It’s been great to play new songs that have such a different feeling from the old songs they have. They are a lot more exciting to play live, so it’s been really nice and refreshing.

With the album finally out and touring on its way. What else have you got coming up?

A lot of shows. Maybe I’ll go back into recording, but I’m trying to just take it slow right now. Because I don’t want to rush anything. I don’t have any dates in Asia booked at the moment, so hopefully, then we’ll see you again.

We do have some remixes in the works, but nothing that’s been announced yet. So I’m not sure if or when they’ll be coming out.