Lucas Nathan About Jerry Paper, His Music, and Human Nature 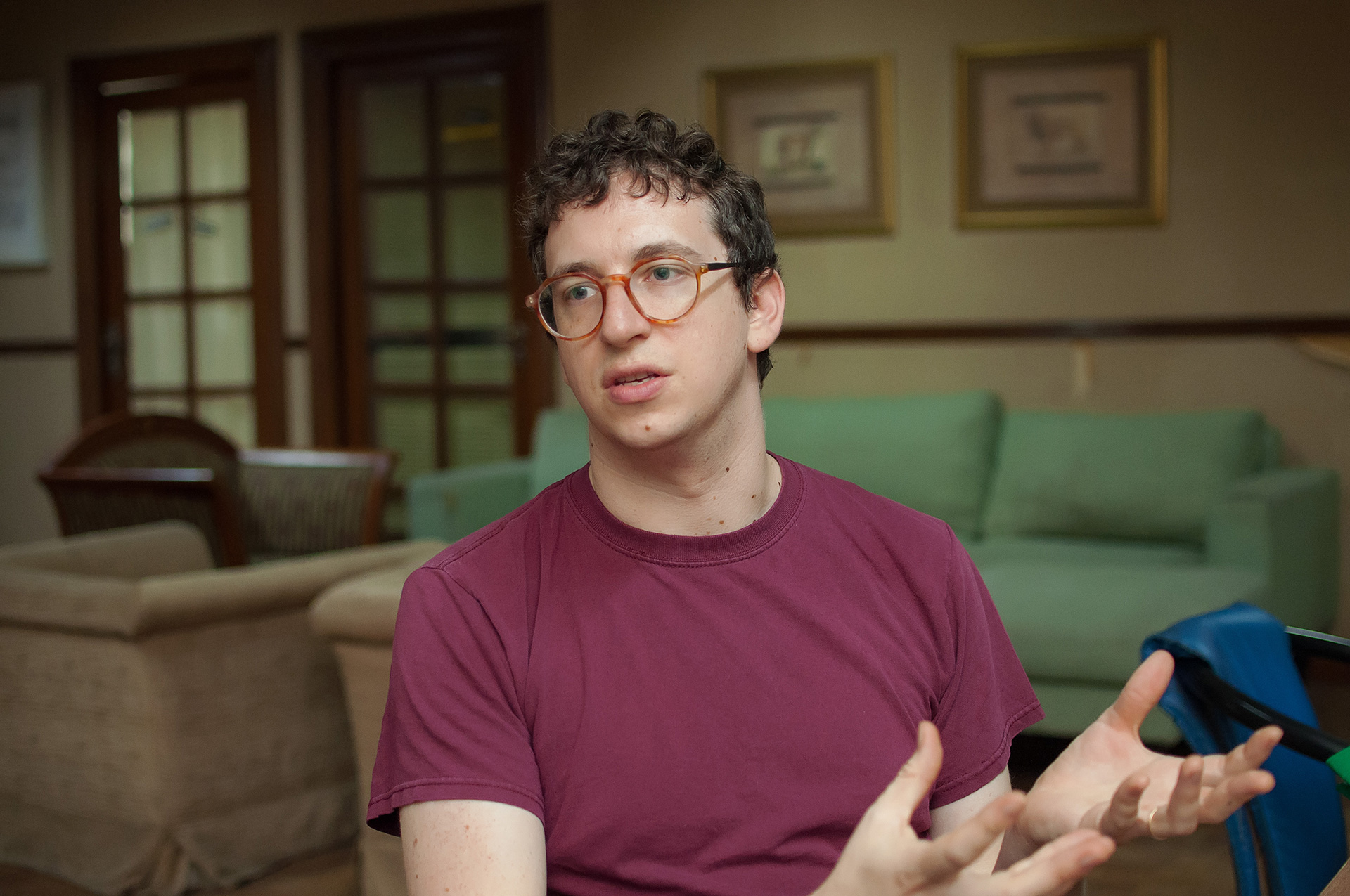 Lucas Nathan About Jerry Paper, His Music, and Human Nature

His musical musings about the complicated existence of human beings.

Lucas Nathan, the man behind the performer Jerry Paper is out to figure out the balance between real life and fiction. His background in religion philosophy and music sociology shaped his interests – along with it, his music – into works which consistently explores the depths of human life and its complicated nature, such as his latest album “Like A Baby” with existentialism as a theme. Applying the division of his two personas simply between onstage and offstage, Lucas speaks more grounded than Jerry sounds. We sat down with him a couple of hours before he’s playing at Rossi Musik as part of his Asian tour, learning more about both figures and the music that ties them together.

On your Spotify profile, it is stated that “Lucas Nathan is the host body for the interdimensional being and experimental pop musician known as Jerry Paper.” Where does Lucas end and Jerry begin?

Pretty much the dividing line is onstage – offstage. So offstage, I’m Lucas.

So I should address you as Lucas now?

Yeah! And then when I’m onstage, I’m Jerry. I think it’s kind of like wearing a mask of myself helps me to be more honest onstage and let loose and be more free. Maybe this is a bad analogy, but this is coming into my mind right now, that it’s like loosening a faucet. I feel kind of more wound up in my normal life, and then when I’m performing I’m loosening a faucet, where I’m kind of able to just flow and don’t think about it in the same way that I think about it when I’m in normal life.

I was definitely really interested in the way mystical experiences and musical experiences are similar, just the lack of boundaries and lifting of the self and all the things that you have decided about yourself

You studied philosophy of religion and sociology of music during your college years. How do the two relate, also how do they influence your works so far?

Definitely less so now, but when I was younger it was very important to me. I was definitely really interested in the way mystical experiences and musical experiences are similar, just the lack of boundaries and lifting of the self and all the things that you have decided about yourself, and all of that disappears when you’re in the midst of music, like a deep musical experience, it is JUST that. It’s a direct experience, not so complicated as normal life. At least that’s what I was really interested in at the time when I was in college.

Your interest in religion and philosophy actually manifested to your work, especially with the Zonotope project and Diane Kensington Devotional Band. Can you share more about what are they and how did they happen?

I think at the time I was overthinking things, which is kind of the opposite of what I thought I was doing. I was just having fun making up stories, it was like a vehicle for my more abstract works, so more noisy things, more loop-based things, like very repetition heavy, kind of more challenging music to listen to. It was in my nature to just come up with stories and have fun, so I was just creating this world around the music.

You mentioned once in an interview, that “musical sounds act as symbols, but they carry information that can bypass linguistic processing.” Does the music matter/mean more than the lyrics, then, in your songs?

You know, I was interested in this idea of stripping away language from these things, but I think that that’s impossible now, so at the time I was just really interested in ambient music. Yeah, I feel like now I’m not overthinking it as much. And I do think of music – especially pop music like the kind of music that I make – those songs are grammatical, they have language in them even without words, there are symbols, they way the structure goes are very symbolic, they trigger things that we’re used to, it’s like this song is reminding us of all the other songs we’ve ever heard. So I think the idea that there’s some pure musical experience is actually a foolish idea that I was interested in, now I’m more okay with the fact that language is just a part of our world and there’s no way to experience the world without it.

Do you still use that approach now, with your current music?

I think it has come together in a different way, a part of me is still there in the music. But I think now my lyrics – those days my lyrics were story-based, they’re kind of like science-fiction. But then the early Jerry Paper stuff is very honest, is very much like, “I feel this, this is what is going on”, it was kind of like that. Nowadays, the story element I incorporate into the songs, that the lyrics are stories much more so than they used to be, I think, or at least I think I’m doing it better now (laughs). I think the story element is no longer outside the music, now it is inside, now that I’ve gotten past my aversion to language. And aversion to mixing language and music, now to me it’s like all these symbols – and any art making is playing with symbols. So I’ve been taking these symbols and turn them into stories, little narratives that are contained in songs.

The temporary nature of life, we’re all going to die and life can be so difficult and beautiful, even within these systems and this lack of freedom we can still love being alive, and accept each other as people.

The world is just so complex and humans are so small in comparison to everything! We can’t even see the world through different eyes, so how could we possibly know what the world is exactly like? We only process the world through our own little brain, we don’t actually know what is going on. The temporary nature of life, we’re all going to die and life can be so difficult and beautiful, even within these systems and this lack of freedom we can still love being alive, and accept each other as people.

Would you say that there’s a little bit of politics in there as well, then?

Definitely. The political system is crazy right now. It is so fucked. I was writing the album right before and after the election, so there was no way it didn’t influence my thoughts at the time.

“Like A Baby” also marks your first album released after joining Stones Throw. How did you get in touch with them in the first place, and how has it been so far?

I moved to LA at the end of 2015, so this is the first album that I worked on when I was living there. I recorded and wrote that when I was living in New York, but this is definitely a more LA-influenced just in terms of me being there. I wrote the album and went recording in Toronto, when I was done I was like, “Okay, now I need to find a label.” And I send it to some friends and was trying to get in touch with a few different labels to show them the album.

So you actually finished the album not under the label, then?

Yeah! Then I sent it to Alex who does Mild High Club, and he sent it to Peanut Butter Wolf, put me in touch with him and things just went from there. This label is definitely the biggest label that I’ve ever worked with, I’ve worked with smaller labels. But definitely this has been the most support that I’ve had. It is nice (laughs)

Exactly! Just let myself flow, and then I’ll figure out what goes on the album.

So do you actually plan your music-making process?

I used to plan out albums, but for the one I’m working on now, it’s like everyday I just play music. So everyday I would just wake up, have coffee and a little breakfast, and I would just sit down by the piano and play for like ten minutes just to get going, just mess around even when it sounds like a dumb thing that sucks. It feels good to do that because it centers me, in a way. And then from there, if I did something that I think worth expanding on, I’ll listen back. I usually record those little things that I do in the morning and listen back and be like, “Okay, this part sounds pretty good, let’s go from there”. I’ll write the drum part and bass part, then put it together and at the end I’ll be like, “Alright, this is garbage.” Throw that away, but it still felt good. Sometimes I’ll be like, “You know what, this is maybe worth expanding on,” and I’ll spend the next day expanding on that. I just let myself go and not worry so much, that’s at least where I am at now.

So you mentioned that the Lucas/Jerry division is when you are performing. But when you are making the music, is that Lucas or Jerry?

When I have an identity like Jerry, that is always in opposition of other people. I always make music alone, so when I make music alone I don’t really have to think about who I am. I guess when I’m performing, Jerry is the mask that I wear so I can let the person that I am when I’m alone, out. Does that make sense?

I like that idea of dismantling the personality, going back and actually reexamine things from your likes and dislikes.

Having explored the spiritual and philosophical world quite extensively since the beginning of your music making journey, how will you navigate it further in the future?

I don’t know, I’m just kind of along for the ride. See where life takes me.